A new entry on UserBenchmark has just emerged featuring yet unreleased 12th Gen Core part called i7-12650HX. The company has thus far only released a 12650H variant based on Alder Lake-P silicon. It has recently been reported that Intel will be adding new models for laptops based on the 16-core desktop silicon but on the BGA package. This silicon is to feature full 8 Performance and 8 Efficient cores, an upgrade over 6+8 on the Alder Lake-P chip.

This leak would suggest Core i7-12650HX actually has a different configuration than i7-12650H, further segmenting the lineup and probably causing more confusion for customers. The chip would offer just as many cores as i7-12700H CPU, which is 14-cores and 20-threads. This suggests a configuration of 6P+8E and therefore a cut-down Alder Lake-S silicon. 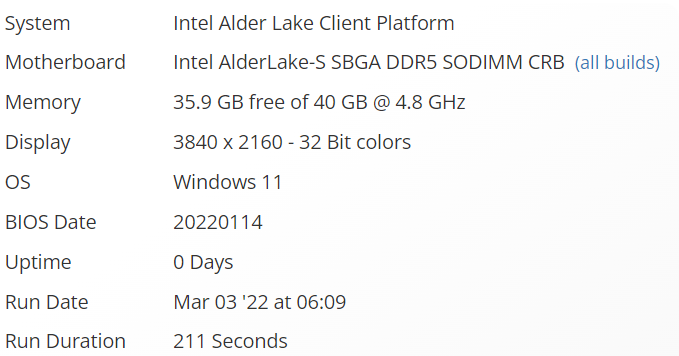 Alleged Alder Lake-HX series have been spotted on leaked Intel slides last year as H55 series with TDP ranging from 45 to 55W. Interestingly, this slide did not list 6C+8c parts.

Intel has not made any comments on the potential Alder Lake-HX launch yet. In fact, we have already seen Intel-based high-end gaming systems being deployed by laptop manufacturers, which raises a question where could 12th Gen Core HX-series really go into.