The first Tiger Lake-H CPU has just been spotted on Geekbench.

It appears that notebook manufacturers have begun testing 11th Gen Core H-series CPUs. The first Tiger Lake-H processor to make its way to the Geekbench website is the Core i7-11800H, the new 8-core and 16-thread CPU based on Willow Cove architecture.

The Core i7-11800H will have a base clock of 2.3 GHz and a max boost up to 4.6 GHz. In comparison to already released Tiger Lake-H35 CPUs, the H-series will have twice as many cores. The U and H35 series were based on the same silicon. The H-series, on the other hand clearly needed more time to reach the market. It is currently expected that Intel will launch its 11th Gen Core H-Series by the end of the second quarter.

The CPU was tested using a Samsung 760XDA laptop, without a discrete GPU. The system was paired with 32GB of DDR4 memory. 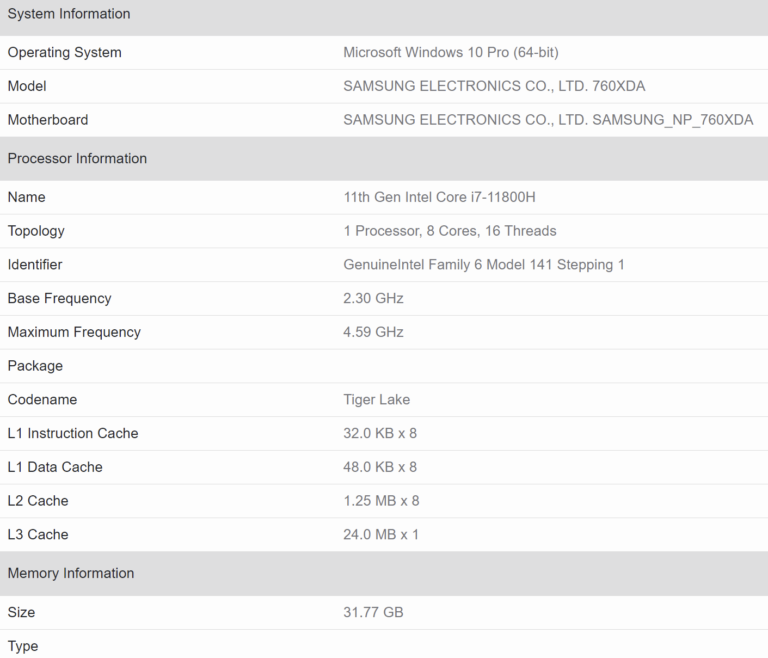 The Ryzen 5000 HX series are not yet listed in Geekbench performance charts, but it wouldn’t be a fair comparison anyway because the HX series are unlocked. The Ryzen 9 5900H, on the other hand, has an average of 1551/9006 points, which would be 1% and 7% faster than 11800H respectively, compared to the best score of Tiger Lake-H CPU.