The 11th Gen Core series may not be here yet, but the samples of new Intels processors certainly are. It appears that after visiting Geekbench, the upcoming 8-core and 16-thread processor based on Cypress Cove architecture has made its way to PassMark ranking.

The CPU is listed with a 3.6 GHz base clock and a 5.0 GHz turbo clock, which are identical specifications to what the Geekbench leak had already confirmed. The CPU scored 27,108 points in the CPU Mark test with 3,548 points in the single-thread rating alone. The CPU may not be as strong in the multi-threaded test as Intel’s i9-10900K featuring 10 cores, and Ryzen 9 5950X featuring 16 cores, but the sample still managed to score really high single-thread result.

Unfortunately, PassMark website does list detailed benchmark results of each run, thus we are not sure what was testing platform was used for this test (motherboard, DDR4 memory specs etc.).

As noted by the PassMark themselves, the result is only based on a single sample, while other SKUs already have 300 to 1000 averaged samples. Although the comparison is certainly affected by a small pool of samples, we can already see that the i7-11700K is faster than any of the other high-end CPUs in the comparison below.

The Core i7-11700K is 14% faster than it’s predecessor 10700K in single thread rating and 33% faster in cross-platform rating. In comparison to Ryzen 7 5800X (which is also an 8-core and 16-thread CPU), the Rocket Lake-S processor offers almost identical performance. The difference between those SKUs is within a margin of error. 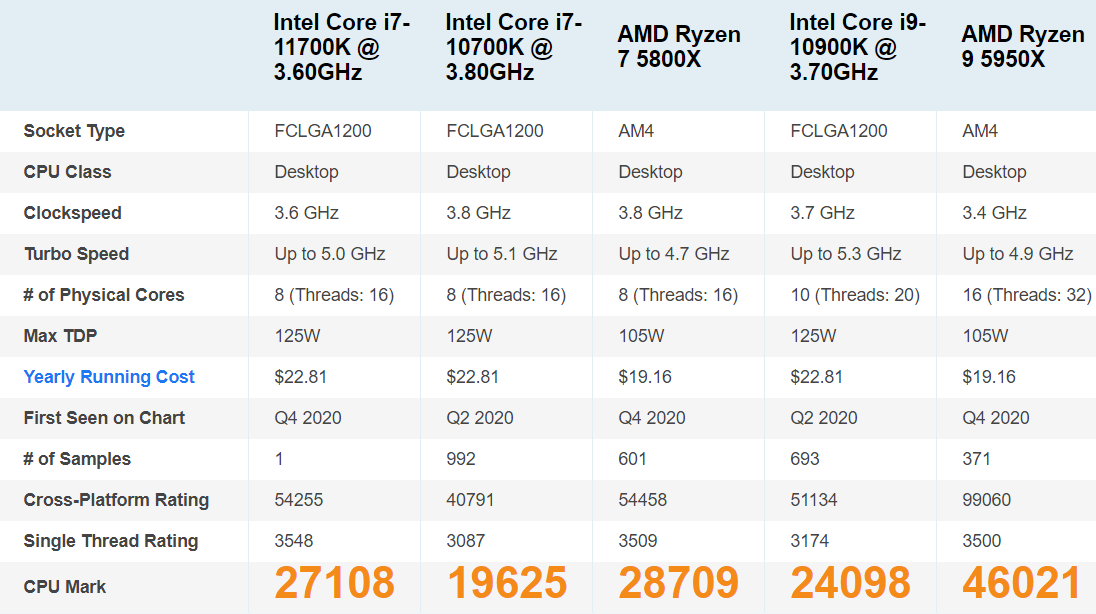 Intel is expected to unveil its 11th Gen Core series at CES 2021, but the availability is not planned till March. Intel Rocket Lake-S CPUs are still based on 14nm process technology, but they rely on new core architecture known as Cypress Cove. The CPUs also support PCI Gen4 and feature Gen12 Xe onboard graphics. The main concern for the new series is the lack of 8+ core SKUs, despite the current (Comet Lake-S) series already offering such a configuration.