NVIDIA RTX A5000 is an upcoming professional graphics card for workstations. It has been spotted on Ashes of the Singularity website in a next-gen laptop. The device would also feature a CPU that has not yet been seen in previous leaks.

Not much is known about this laptop workstation card yet, but NVIDIA is likely to adopt the same GPU for desktop and mobile variants. The RTX A5000 desktop is expected to feature GA104 GPU. The exact configuration of the mobile variant remains to be confirmed. AotS website does not provide any details on GPU or memory configurations. What we do know about GA104 GPU is that it offers up to 256-bit memory bus, thus 16GB or 8GB configurations are possible. 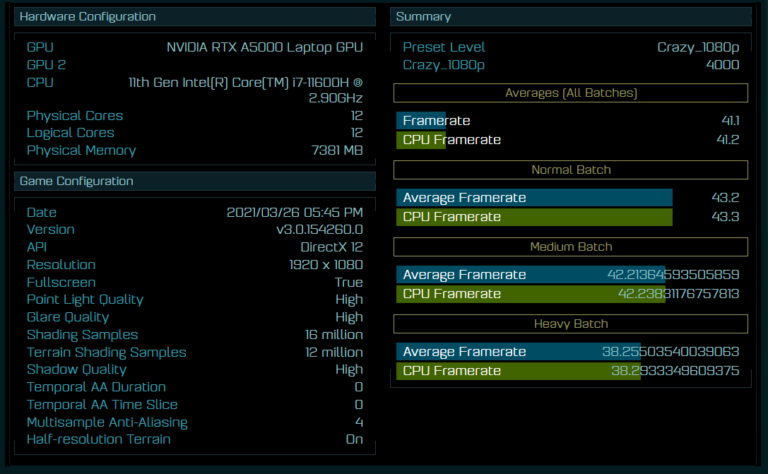 A bit more interesting part of this leak is the appearance of the new Tiger Lake-H SKU. This processor has not been listed in any rumored spec lists before so this is indeed the first time we are seeing this CPU. According to the AotS benchmark, the CPU is a 12-thread CPU with a base clock of 2.9 GHz. This is so far the highest base clock from all Tiger Lake-H high-end CPU series (not including 119800HK in 65W mode which is configured to 3.3 GHz). It is worth noting that the software incorrectly reports on 12 cores though.

Source: Ashes of the Singularity