The ‘locked’ non-K series of Alder Lake 65W CPUs should not be the first choice for overclocking, mainly because there are many things to consider, such as the motherboard being used, CPU’s hybrid configuration, or the fact that the CPU will simply consume more power. However, with the latest 12th Gen Core series, Intel made 65W CPU overclocking a bit simpler, no longer depending only on the max power settings (PL1/PL2).

In short, by manually manipulating the BCLK (Bus Speed), the target CPU frequency will also be increased. With Alder Lake CPUs, this frequency is no longer attached to other components such as the PCIe interface, which would normally cause problems and was typically not the best way to overclock non-K CPUs. 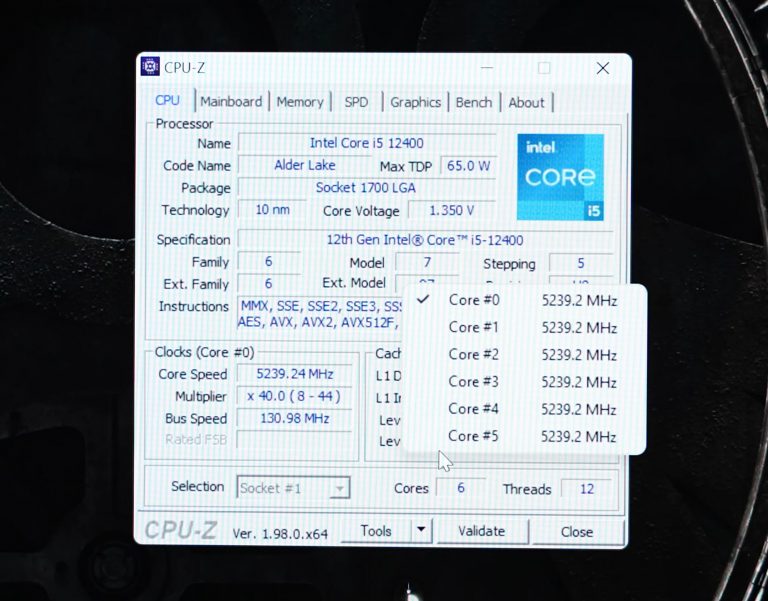 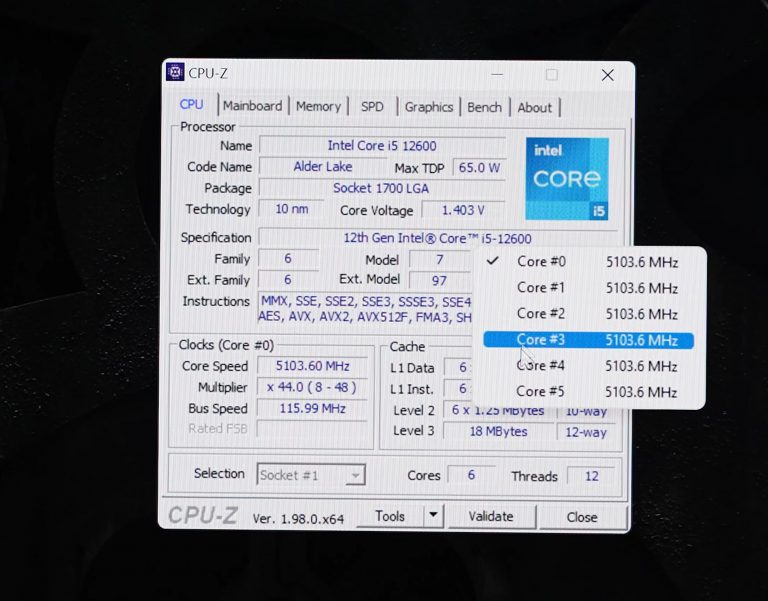 BCLK OC only available on some high-end boards?

Der8auer discovered that the BCLK overclocking options are available on ASUS Z690 motherboards (in this case ROG Maximus APEX) and only when a non-K CPU is present. He did check on the B660 motherboard which did not feature such an option. According to the YouTuber, the BCLK OC options are now confirmed on Z690 APEX and Z690 HERO motherboards with 0811 BIOS. This option is confirmed as not available on ROG STRIX Z690-I. The status of other ASUS motherboards is unknown.

Furthermore, Der8auer thinks that this option may only be available on high-end Z690 motherboards equipped with an external clock generator, a feature expected from the boards such as ROG Maximus, ASRock Aqua, and other very expensive models.

The whole overclocking procedure is actually quite simple and shown in detail in the video below. Users are required to unlock the BCLK OC function through the bios (in ASUS BIOS it’s hidden under Extreme Tweaker-> Tweaker’s Paradise settings). Then one must enable the XMP II profile and modify the bus clock to around 130 MHz. This will automatically increase the DDR5 memory frequency and cache frequency, so both have to be manually decreased. The memory should match the recommended XMP maximum speed and the cache ratio has to be lowered from 40 to around 33. 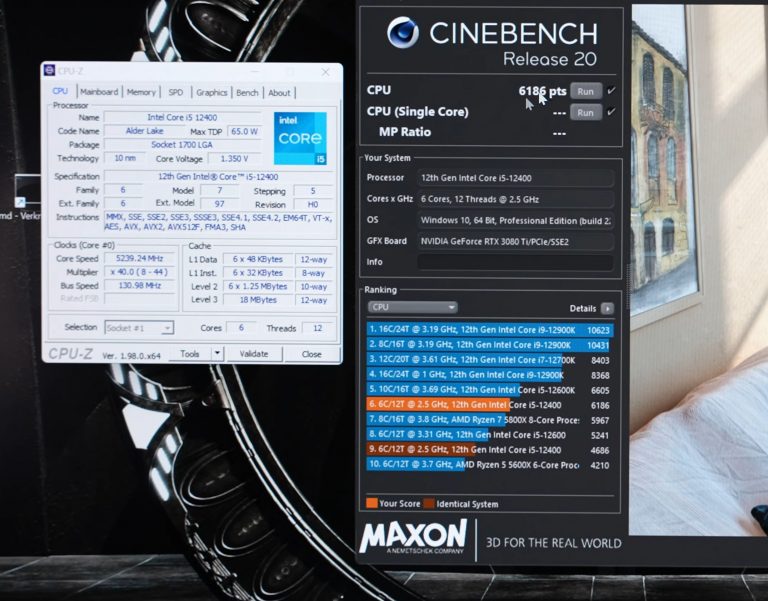 The new overclocking settings will require more voltage, which is why the core/cache voltage has to be increased to around 1.35-1.37V claims Der8uer. The overclocker then goes into detail as manipulating the input voltage and load-line calibration, both are shown in the video.

However, keep in mind that all these settings will depend on the sample, as results may vary depending on the CPU binning. The testing has shown that the power consumption has increased to a maximum of 138W and individual cores would reach 96°C: 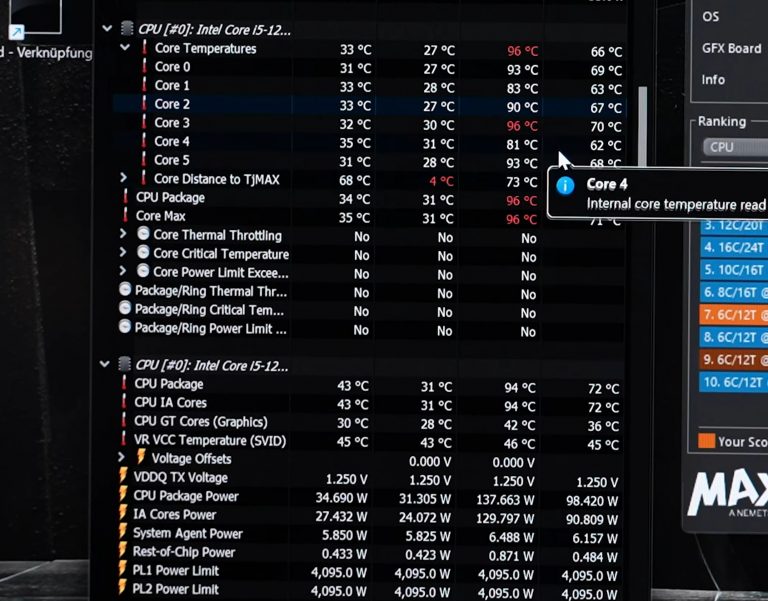 Interestingly, der8auer also tested a Core i5-12600 CPU, based on the same 6-core silicon as 12400 and technically a higher-binned chip. Yet this CPU was unable to each the same BCLK frequency as the 12400 and as a result, it would not be as fast in actual testing.

Both CPUs are seeing a double-digit performance in the CInebench R20 Multi-core test. The i5-12400 performance increased by a jaw-dropping 33%, while Core i5-12600 sits at +16% compared to the stock settings. 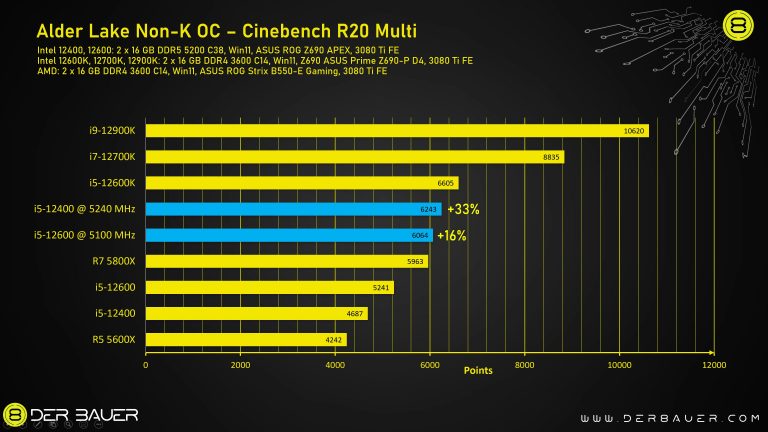 Depending on a game being tested, the overclocked 12th Gen Core non-K can either top the chart as the best gaming CPU, or sit somewhere in the middle. This greatly depends on how the game utilizes the hybrid core architecture or simply a large number of cores. 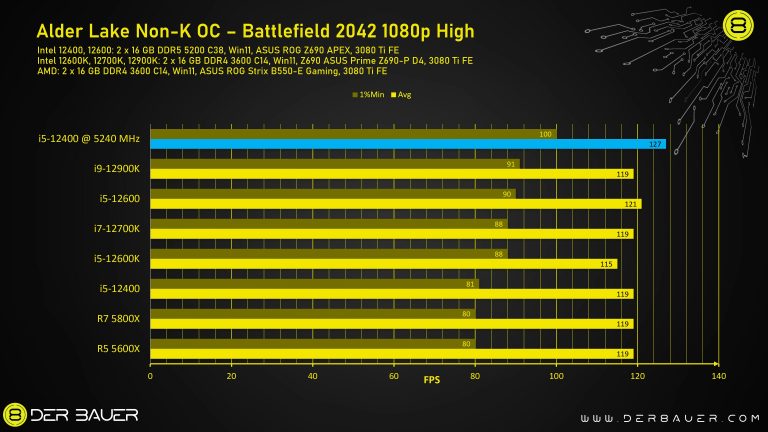 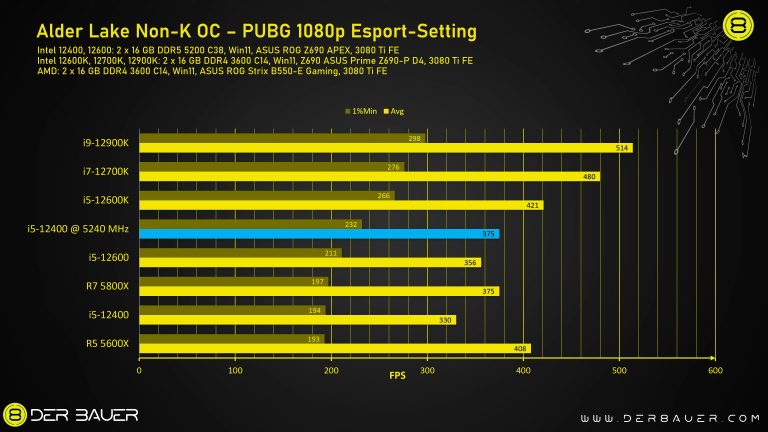 We are yet to learn which motherboards from ASUS and other companies support the BCLK OC feature. This overclocking method may have very limited access due to the cost of high-end motherboards with external clock generations (supposedly required for this to work). If this is not the case and BCLK OC will make its way to cheaper Z690 motherboards at some point in the future, then this might be a very interesting choice for mid-range builds.