Intel Rocket Lake-S with 6-cores makes a debut on the Geekbench website.

Most Rocket Lake-S leaks covered the 8-core Core i7/i9 series, leaving the Core i5 series a bit of a mystery. Today the first result of the i5-11600K CPU on Geekbench has been discovered, but it does paint a clear picture yet.

The i5-11600K is a 6-core and 12-thread Rocket Lake-S CPU with a base clock of 3.9 GHz and a boost clock of 4.9 GHz. The sample was tested on a Gigabyte Z490M motherboard and (unfortunately) with 2133 MHz DDR4 memory. This means that the score is definitely affected by relatively slow memory configuration. 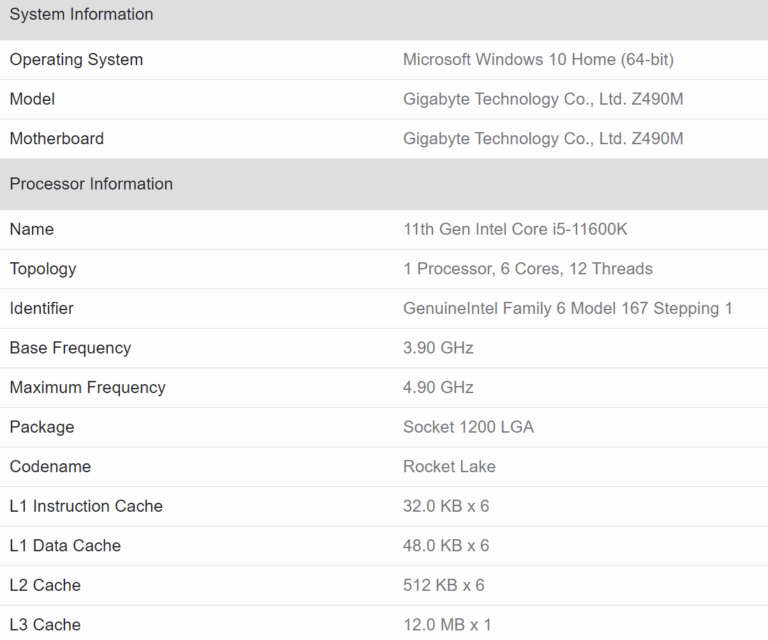 With a single-core score of 1565 points, the CPU is slower than 6-core AMD Ryzen 5 5600X. The same applies to multi-threaded performance. However, in comparison to Comet Lake-S CPU, we are looking at a 19% increase in single-core performance. There appears to be an issue with multi-core performance, as right now it appears that the current-gen CPU (10600K) is 13% faster than its successor.

The chart below represents average scores, either from the official Geekbench V5 CPU ranking or manually calculated from available scores.

Intel is set to announce its Rocket Lake-S CPUs on March 15th. The series will feature PCI Gen4 support and a new Cypress Cove core architecture. This will be the final series for the LGA1200 socket.