Intel Core i5-11400 will be the slowest and cheapest “Rocket Lake-S” CPU. With hyperthreading support, this CPU will offer 6-cores will 12-threads, which is the same configuration as Comet Lake i5-10400. Frequency-wise the CPU isn’t really much faster, it only features a 100 MHz higher turbo clock than its predecessor.

Today new benchmark results have appeared on Geekbench, those are the first result featuring the CPU. The sample was tested twice on the ASRock Z590M Pro4 motherboard with 16GB of DDR4-2133 MHz. The memory speed will definitely affect the performance, so the results that were reported by Geekbench 5 should only be considered a starting point for future comparison. Reviewers are unlikely to use such a slow memory, especially on Z590 motherboards.

The Core i5-10400 has a price tag of 182 USD. The Rocket Lake-S CPU is expected to feature a similar price. It probably does not make much sense to pair this CPU with the most expensive motherboards, such as Z590. 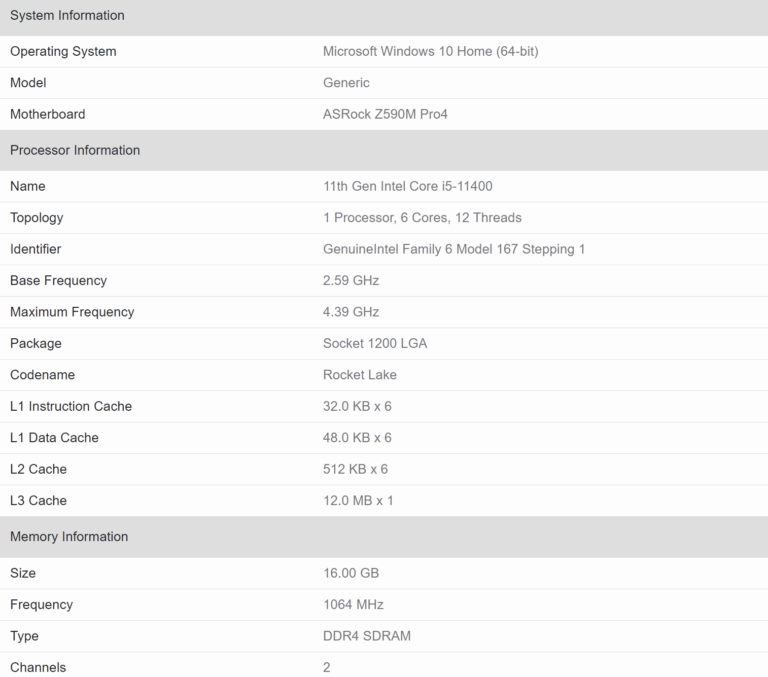 Below we compiled a list of all 11th Gen Core “Rocket Lake-S” results at Geekbench. For unreleased Intel CPUs, which were not added to the official Geekbench 5 CPU ranking, the values represent average scores from all valid entries. Only one valid i5-11600K score was reported at the time of writing. So do note that this CPU has relatively low multi-core performance mostly due to slow memory being used.

With a single-core score of 1490 points, the CPU is 34% faster than Core i5-10400 from the current generation. A multi-core score of 6576 points means that the CPU has a 16% performance increase over its predecessor. What might be interesting is that the cheapest Rocket Lake-S CPU is already faster in single-core benchmark than any Comet Lake-S CPU.