Igor Wallossek has published a datasheet (from HWiNFO) for the upcoming 12th Gen Core Intel processor.

A datasheet featuring Intel’s new CPU codenamed Alder Lake-S has been revealed by Igor’sLAB. The site gained access to the specification sheet of a CPU codenamed Core-1800, which does not seem like a final name for a product. After all, the processor that is being listed is a B0 stepping which is the second revision engineering sample (ES2). This means that the CPU will still see changes in frequencies in comparison to the qualification sample (QS).

The CPU has a relatively low base clock of 1800 MHz. The datasheet confirms that the Core-1800 sample will boost up to 4.6 GHz with two cores, up to 4.4 GHz with 4 and 4.2 GHz with 6. An all-turbo boost is 4.0 GHz. The datasheet does not mention Atom cores clock speeds, but it is said in the article that it will boost up to 3.4 GHz, but only with half of the cores (this sample has 8 in total). Igor claims that these specifications were reported with a voltage of 1.3147V. 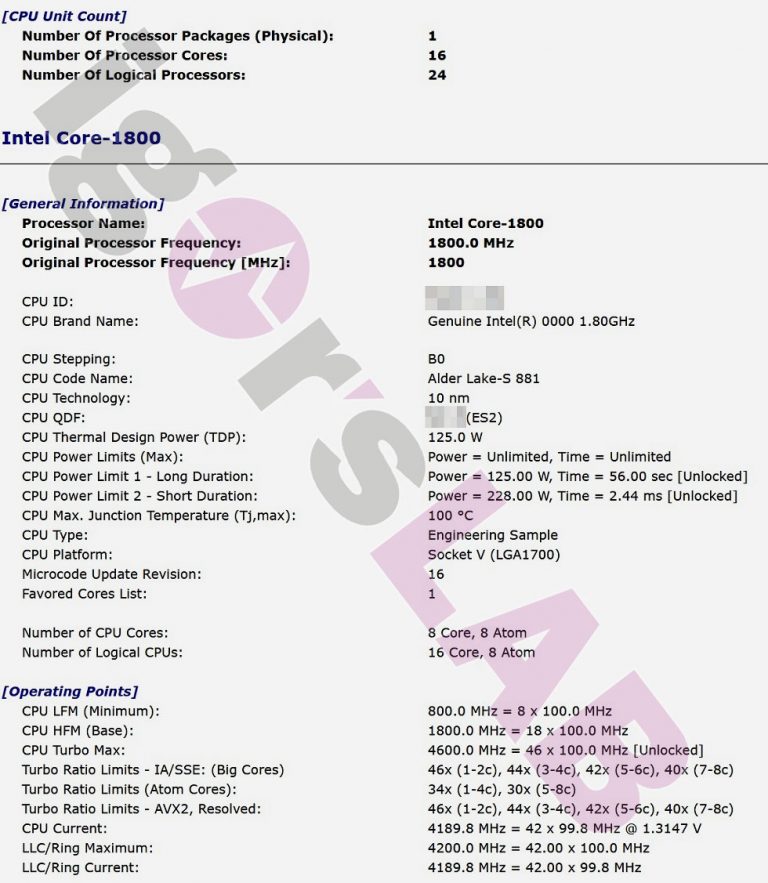 The upcoming 12th Gen Core series will be a major change in Intel architecture for desktop and mobile processors. The series will introduce a new version of Intel Hybrid architecture, which debuted in low-power CPU series called Lakefield. Alder Lake takes things to a new level by introducing up to 16-core CPUs, which will feature both high-efficiency (Atom) and high-performance (Core) compute cores on a single package. Intel Alder Lake-S is fabricated in 10nm SuperFin architecture, which is a major shift from now outdated 14nm process technology, still used by Intel for its 11th Gen Core series.

Major changes are coming to the motherboards too. The series will support DDR5-4800 memory as well as PCIe Gen5 interface. A shift to modern I/O interfaces and a larger Socket V (LGA1700) package will require new motherboards, rendering all existing high-end Z590 motherboards unfit for any new modern CPU, once Alder Lake drops.

Intel Alder Lake-S will be released this year, which Intel has confirmed multiple times. The company has not provided a possible announcement date yet, but according to rumors, it might happen by the end of the third quarter.