Just as rumored, Intel will unveil its Xeon W3400 and W2400 series on February 15th. This date is now officially the announcement date of Intel’s workstation platform, a direct counterpart for AMD Ryzen Threadripper PRO series which have not been updated to Zen4 yet.

Intel Xeon W-x400 series are to include SKUs offering up to 56 cores, 350W of power and 4.8 GHz turbo clocks. Intel is not forgetting about enthusiasts either, the special X-series models are also planned that would allow overclocking. This means that Intel will finally release the long-awaited successor to its Core-X models.

Intel did not reveal any further details today, other than confirming two Xeon product lines: W-3400, W-2400 and upcoming W790 platform. An overview of this and Intel’s latest C741, W680 chipsets was posted yesterday by HXL. 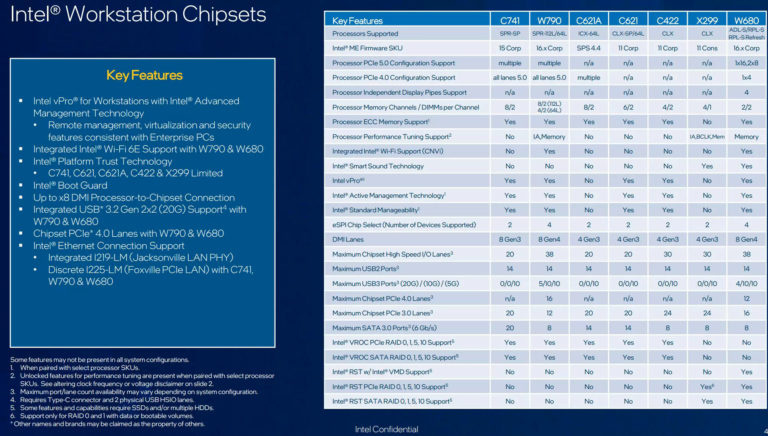 This slide confirms that new generation of workstation series will support PCIe Gen5 and DDR5 memory for the first time. Furthermore, the W790 chipset will support both Xeon CPU series (labelled as 112L and 64L respectively). The main difference between them is memory support, either octa-channel or quad-channel, but both support DDR5-4800 memory by default (this was confirmed by previously leaked slides).

AMD has not responded yet by even teasing its next-gen Threadripper series, but at the same time, the current-gen based on Zen3 architecture already offers 64 cores, so more than flagship Sapphire Rapids-112L CPU (Xeon W9-3495X). AMD platform will be behind by not providing PCIe Gen5/DDR5 memory support, though.