The next-gen HEDT platform might not be here yet, but Intel is now confirming the existence of the new chipset.

The W790 chipset has a Q-Spec of SRL02 and is already available in B1 stepping, which is the same one all current 600-series consumer motherboards use. This is indeed the first confirmation from Intel on this chipset. The document does not explicitly mention what CPUs will be supported by this chipset, however this is not the first time we hear about it. 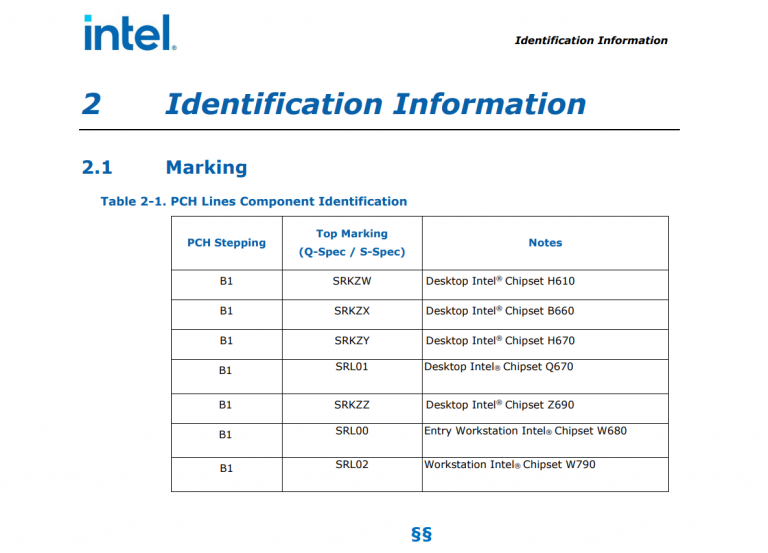 The W790 chipset appeared last year as the platform for Sapphire Rapid HEDT. What is commonly referred to as Sapphire Rapids-X is a successor to Glacier Falls platform and Cascade Lake-X CPUs, which haven’t been updated in a very long time.

By shifting the naming schema from X to W series chipset, Intel is clearly suggesting that such systems will be designed for workstations not just enthusiast. This is actually a very similar path that AMD took by canceling their non-Pro Threadripper series. The real Core-X series may be truly dead.

The W790 motherboard series were rumored to launch alongside Raptor Lake, which is early Q4 2022. Unfortunately Intel encountered issues with Sapphire Rapids-SP for data centers, a delay that could also affect said Sapphire Rapids-X series.

Thus far we only know about one motherboard with W790 chipset. Last month, ASUS Pro WS W790E-SAGE was listed by HWiNFO monitoring tool changelog. ASUS SAGE series are designed for servers and workstation systems, but there hasn’t really been an update since C621 chipset for Intel’s 2nd Gen Xeon Scalable CPUs (205W). The W790 based motherboard would not only support DDR5 memory and PCIe Gen5 interfaces, but also Intel Sapphire Rapids-X CPUs possibly featuring up to 350W TDP.