Despite the fact that the new driver officially only supports Arc A350M, A370M and 12th Gen Core iGPU mobile graphics, the included info files actually mention the upcoming desktop series as well. This newly released driver (30.0.101.1723) actually matches the same version that has been leaked in late April. This might be the driver that Intel promised to release by the end of April, however due to some development difficulties, it only becomes available 2 weeks later.

Files that are included into the driver package list unreleased desktop SKUs. This actually would be the first time Intel confirms as many as five upcoming desktop SKUs: A770, A750, A580, A380 and A310. At this moment, there is no sign of the A780 or A350 series for desktops. Furthermore, the list features Arc Pro A40/A50 and A30M for laptops. Those are the new workstation/professional solutions that have not yet been released. 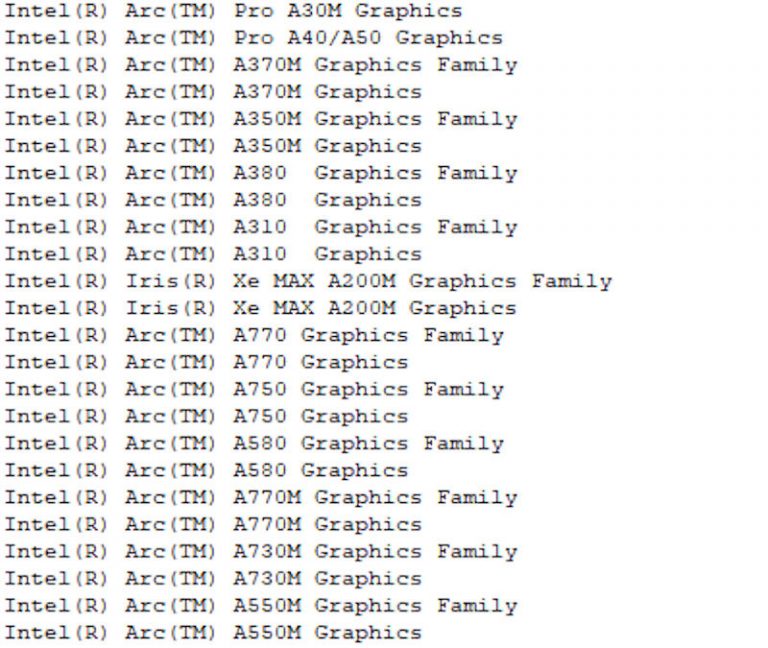 Intel recently confirmed that in the first stage, Arc desktop GPUs will be released exclusively for Chinese OEMs. Only later the launch will include OEMs outside China and finally board partners globally. The Arc desktop will therefore launch just weeks before AMD and NVIDIA introduce their next-gen GPU series. One thing is sure, with the new list of SKUs, Arc-hunting on AliExpress should be much easier.