Intel has updated its official repository website with details on Intel DG2. Unfortunately, none of these files are accessible. Documents are only available to people who are under NDA (such as system integrators or laptop makers. What isn’t clear is why the files are easily searchable, revealing some of the details in the process.

First and foremost Intel confirmed DG2 will launch in three variants: 512 EU, 384 EU, and 128 EU. The EU stands for Execution Units (the main building block for Intel graphics architecture. If there are no significant changes to the architecture, those GPUs would feature 8 shading units per EU. Thus, the 512EU variant might have up to 4096 ALUs (aka cores). The DG2-512EU will have a BGA2660 socket whereas DG2-128EU would require a BGA1379 socket instead. 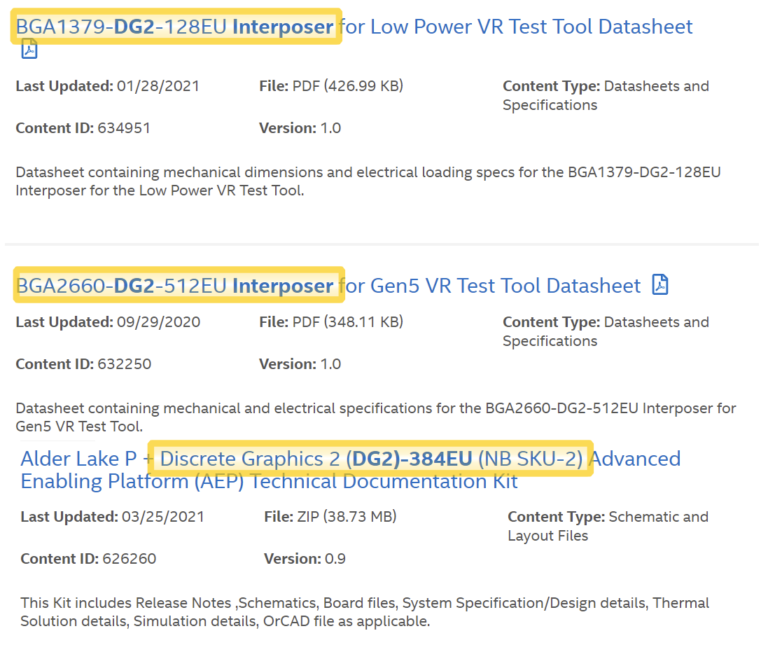 The data also reveals that mobile variants of DG2 will feature five SKUs. The details on those variants are unknown, but there have been rumors that Intel might release 512, 384, 256, 192, 128, and 96 EU variants. Some of those could be for desktops though:

There are multiple listings with memory configurations for DG2 GPUs. It would appear that the flagship model will indeed get 16GB memory and have a TGP of 150W, specs similar to NVIDIA GeForce RTX 3080 Laptop GPU.

DG2 also confirms that GDDR6 memory support on this GPU will vary from 14 to 18 Gbps. Intel already confirmed Xe-HPG architecture has GDDR6 support, but the company never revealed the maximum speed. Of course, just because the memory subsystem supports speeds up to 18 Gbps, it does not mean that the final product will offer such a speed.

One of the listings also clarifies that the GPU will be available as an add-in card. This means that at least some variants (not clarified which one exactly) will not be soldered onto the motherboard but offered as a separate board instead.

Designed for both Tiger Lake-H and Alder Lake-P

This information aligns with the specifications that leaked last year. For DG2 the ADL-P platform is considered a second-generation but it is not clear exactly what would change in terms of specifications for the GPU itself: