Just a day after AMD introduced DisplayPort 2.0 support for its GPU drivers, Intel confirms their upcoming GPUs are also to support the new display connection standard.

Phoronix reports that Intel has just begun enablement of the DisplayPort 2.0 standard for its DG2 GPUs. Because the DG2 GPU family is mentioned directly in the patch notes, it is therefore safe to say that the first generation of Intel Arc graphics cards codenamed “Alchemist” will feature DisplayPort 2.0 support.

Intel’s DisplayPort 2.0 support begins with 17 patches to the i915 kernel display driver. It is by no means full implementation of the DP2.0 standard yet. The engineers working on these patches still have a long list of things to do. 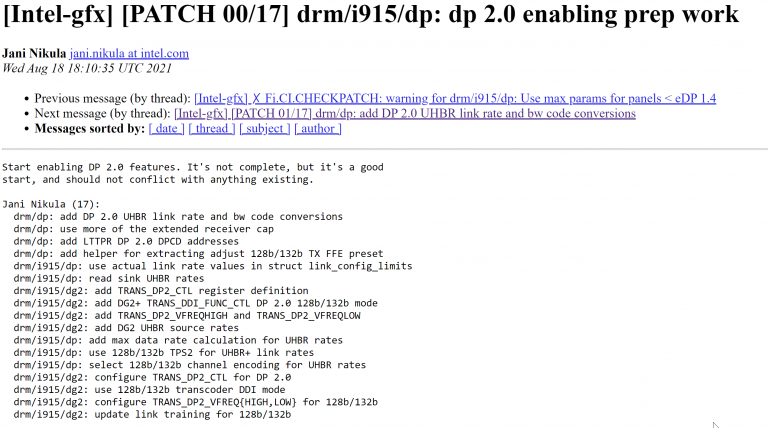 Unlike AMD DP2.0 patches which did not explicitly mention which GPUs are being targeted, Intel’s i915 kernel update actually does mention DG2 directly. This GPU family is to support UHBR (Ultra High Bit Rate) as 128/132b channel encoding.

There are still no DisplayPort 2.0 monitors available, but one could expect the first monitors to become available in 2022. At this moment, AMD RDNA3 and Intel DG2 GPUs are expected to be the first discrete gaming processors with DP 2.0 support. There are for now no leaks on NVIDIA Ada Lovelace support for the standard.