Intel is adding VPU to Meteor Lake and newer.

A new commit to Linux VPU driver today confirms that the company has plans to introduce a new processing unit into consumer 14th Gen Core processors, a Versatile Processing Unit.

The VPU driver is included into the Linux Direct Rendering Manager (DRM), the same way their graphics driver is integrated. The VPU appears 6 years after Intel acquired a company called Movidius, which has been developing their own VPUs. It is not entirely clear if and how Intel plans to incorporate Movidius designs into Meteor Lake, it could be a full-blown SoC-like integration or just a copy of architecture bits needed for Meteor Lake. Obviously after so many years, VPU design should be much more complex.

The confirmation on VPU comes from Kerner.org patches, where the following description is added: 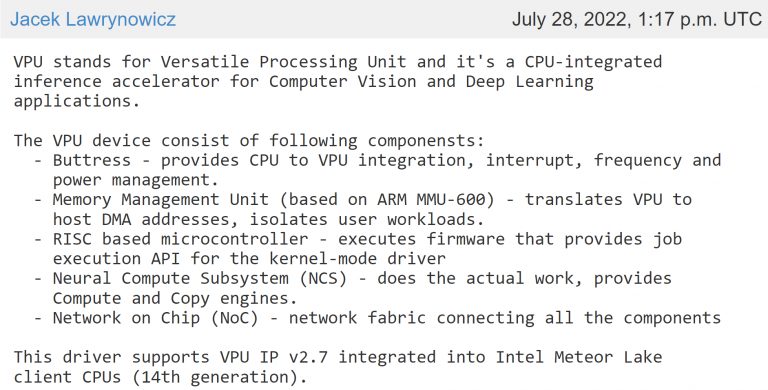 Thus, Intel confirms the new VPU has five components, including CPU to VPU integration unit, memory management, RISC controller, network on chip and the most important part, the Neural Compute Subsystem (NCS) doing the actual work. This VPU unit could be considered Intel’s alternative to NVIDIA’s Tensor Cores, a dedicated chip that is heavily focused on AI algorithms.