In a short statement to HardwareLuxx, Intel has confirmed that german retailer Mindfactory has been selling 11th Gen Core processors before they were officially released. Intel did not confirm if the retailer is directly responsible for breaking the embargo, which could suggest that a mistake was made on a different level in the supply chain. CPU manufacturer says that embargo agreements are always taken seriously and Intel may still follow up with proper actions:

We take our embargo agreements seriously. We are aware of a retailer selling unreleased products and are following up as appropriate.

We cannot comment on particular actions taken by retailers. We have ongoing discussions with partners which are confidential as part of our policy. We take our embargo agreements seriously and are following up as appropriate.

On Friday, Mindfactory has begun selling Intel Core i7-11700K 8-core CPUs from the Rocket Lake-S series. So far Intel only confirmed the Core i9-11900K CPU, after presenting the first performance slides at CES 2021. The Core i7-11700K, on the other hand, has never appeared in any official presentation. Thus, the CPU that went on sale technically did not exist.

Over the weekend, a flood of leaked benchmark results has started to surface on German tech forums. Mindfactory does not ship hardware outside Germany, which basically means that the Core i7-11700K had an exclusive launch in the country nearly a month ahead of the official global launch.

Surprisingly the retailer claimed that it is allowed to sell the product. This implies that whichever distributor had provided the CPUs to the retailer, has not ensured that sales embargo were communicated properly.

Intel also confirmed to HardwaeLuxx that Rocket Lake-S will launch on March 30th. This date appears to correspond to what we reported earlier. We still do not know if the rumored announcement date is still in place (March 16th).

Intel Core i7 and Core i9 specs

Over the weekend, we have learned the full specs of all 8-core Rocket Lake-S CPUs. Wccftech got their hands on the spec sheet defining clock speeds for each of the boost technologies in the upcoming CPUs. Unfortunately, the lists lack 6-core models (Core i5): 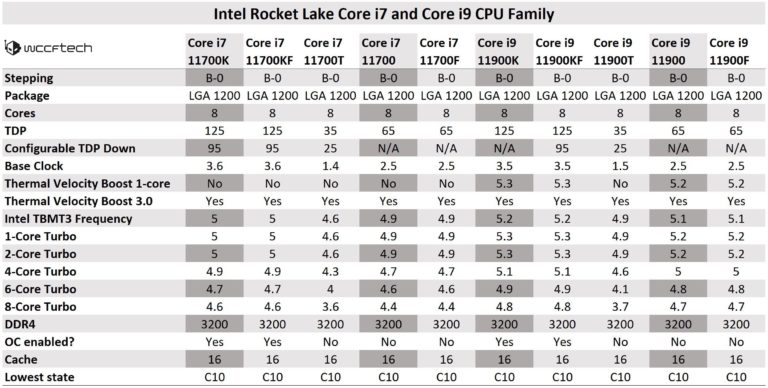