No word on Comet Lake-S

During the CES 2020 press conference, Intel did not reveal any dates for Comet Lake launch, Intel’s latest 14nm high-end processor platform. Highly anticipated Comet Lake-S series, including processors such as 10-core Core i9-10900K, has not yet been confirmed by Intel in any way. At CES, Intel only confirmed that H-series will break the 5GHz barrier for laptops.

On Twitter, Gregory M. Bryant confirmed that H-series (Comet Lake-H), the high-end mobile processors, will be ship this quarter. This means that notebook makers will have a lot of work starting from CES 2020, as AMD also announced it’s Ryzen 4000 U and H-series.

We are currently aware about two Comet Lake H parts, which were leaked through Geekbench. The Core i5-10300H (quad-core) and Core i7-10750H (6-core) have been spotted with boost clocks up to 4.95 GHz.

Meanwhile, it appears that MSI already spilled the beans on the Comet Lake-K series. Their latest MEG Aegis Ti5, officially supporting ‘the latest Core i9 Processor’, has been listed with the 10th Gen Core K series in a press release.

This is the first and only announcement regarding these series at CES 2020. 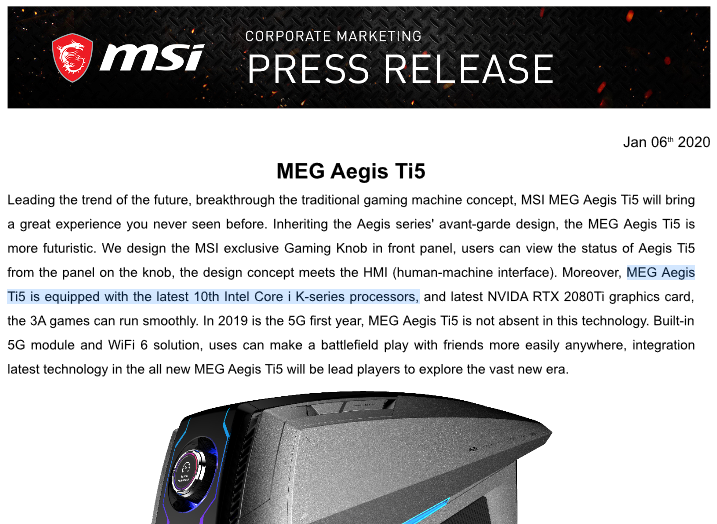