The 2020 desktop series will be Intel’s fourth incarnation of Skylake microarchitecture (after Kaby, Coffee /Refresh/ and Whiskey). This means that the upcoming 10th Gen Core series will still feature 14nm process technology, but refined and optimized for higher frequencies.

Speaking of frequencies, we still don’t know the highest frequency of the Core i9-10900K CPU. In fact, we don’t know if Intel is planning a K version at all. Currently, we only know that the non-K version will boost up to 5.1 GHz, which is already impressive for a 10 Core 65W CPU.

Intel might also revive the F, KF, K or KS series, whichever they feel are the best to compete with AMD”s Ryzen 3000 lineup.

With Comet Lake S, Intel is introducing new 400-series motherboards equipped with an LGA1200 socket. This is where we say goodbye to LGA1151, but the rumor has it, existing LGA1151 cooling solutions will still be compatible with upcoming CPUs. Do note, however, that 10900(?) CPU is likely a 95W+ solution, so not all coolers may work.

The longevity of the platform was one of the key promises by AMD at Ryzen launch. Intel still focuses on a 2-year cadence for their motherboards. It is very likely that Comet Lake-compatible boards will also support Rocket Lake CPUs (expected late 2020/early 2021).

The following chart was generated with multiple sources and rumors (all listed at the very end of this article). That said, it may contain errors or rumors that will turn to be incorrect.

The following charts were shared by Wccftech. This presentation focuses on workstation series, which means they do not include K/S/F series (which are pure gaming-oriented). This is where the biggest chunk od details was revealed. 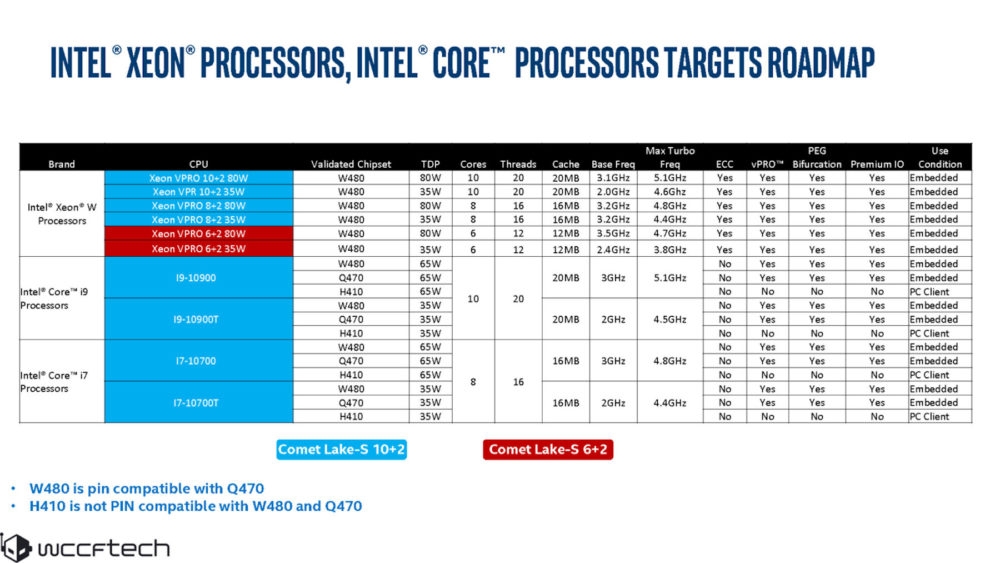 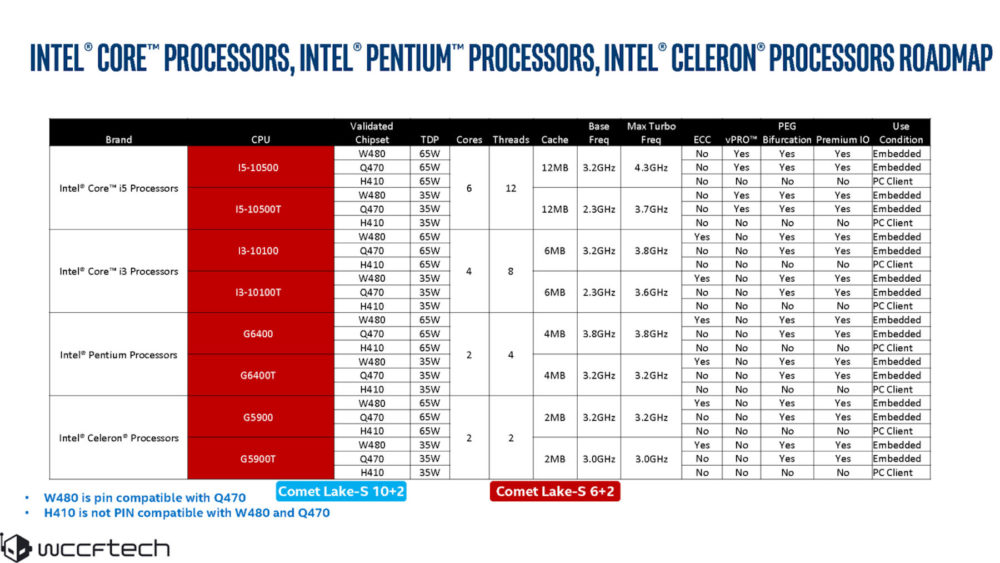 The list of CML CPUs included above also features the 10600 and 10300 series SKUs (spotted by _rogame and APISAK respectively). Both processors are non-K variants with a boost clock of 4.2 to 4.5 GHz. It is expected that and 10600 series will all be 6-core SKUs. It is unknown if all processors will feature Hyper-Threading, but there seems to be no reason why they shouldn’t — even the 10300 does.

In case you see the story, HKEPC also mention Core i5-10400 series with detailed clocks. This CPU is also rumored to be a 6-core.

Internally known as the H5 socket, the LGA1200 is the heart of the upcoming 400-series motherboards. The new socket has more pins and will not be compatible with existing LGA1151 CPUs. 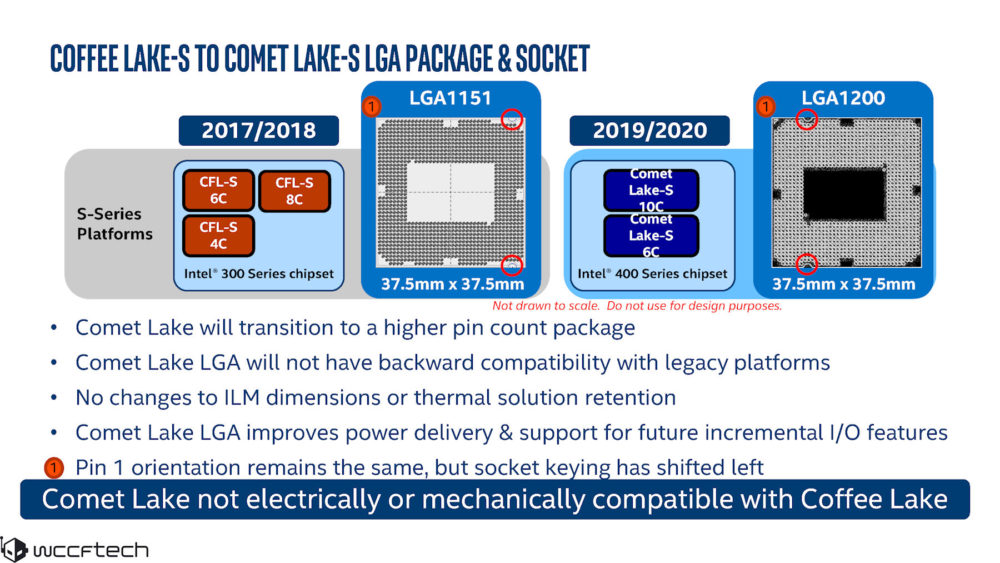 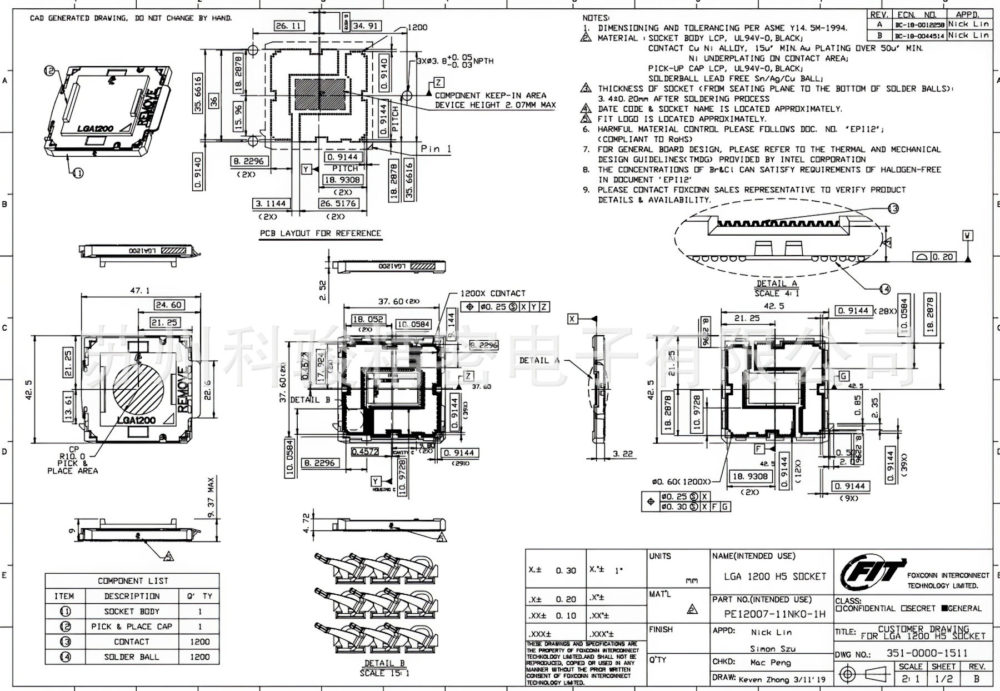 This is a month old leak from momomo, revealing that RKL (Rocket Lake) series would only have eight cores (even though CML is 10C) and that both platforms will be up to 125W. 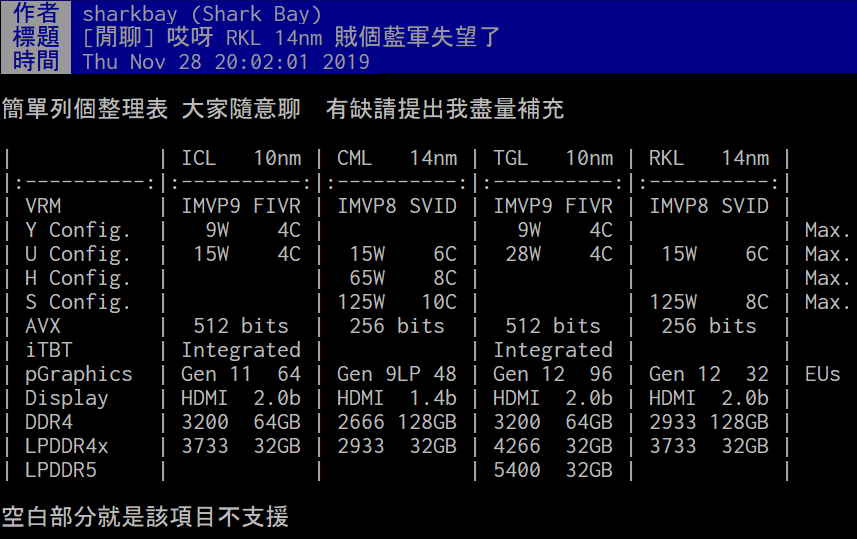