During an interview with Pierre Ferragu, Intel CEO Pat Gelsinger and CFO George Davis responded to various questions on the current market situation in which Intel has found itself right now.

While a large number of questions from Pierre was about Pat Gelsinger’s background and what he had learned from working as a CEO for VMWare, there were also questions about AMD and NVIDIA and how is Intel planning to compete with both companies on CPU and GPU fronts.

Since Pat Gelsinger took over the seat of Chief Executing Officer at Intel, the company had laid out its plans for the next few years, including fabrication node roadmaps, upcoming products for client and server, and also Intel’s grand (re)entry into the discrete gaming GPU market.

Intel will be competing with AMD and NVIDIA in the HPC market with its next-generation Xeon Scalable products but also with its Ponte Vecchio and Xe-HP Arctic Sound GPUs. The company plans to be very competitive in the next 3 to 4 years with a goal to sustain leadership.

Pierre Ferragu (PF): How do you make sure Intel remains central and the number one client in the cloud. 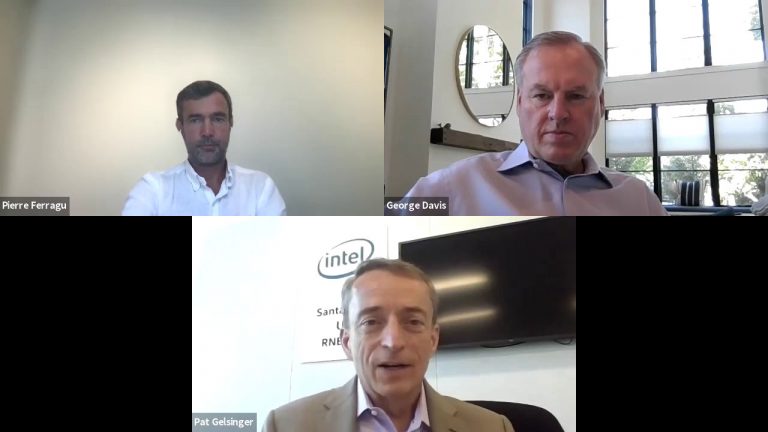 Pat also said that Intel will be competitive with NVIDIA in the GPU architecture market and will for the first time ever be able to put pressure on NVIDIA. With the recent announcement of Intel XeSS supersampling technology and its multi-year plans for Xe-HPG architecture, Intel will have not only have to compete with NVIDIA but also AMD who will be releasing its first MCM GPUs with Radeon 7000 series later next year.

PF:- Will there be a Zen moment for Intel?

PG: We have a number of things going on over here[…] We are rolling out the heterogenous architecture that is part of Alder Lake where we have big and little cores, you know AMD only has one. We’ll have a higher performance and a more energy-efficient version of the core, pretty compelling, we’ll lay out our major vector enhancement stuff, we have our GPU architecture where we are gonna start being in a position to really put pressure on NVIDIA for the first time ever.

And we are laying out our IPU architecture when we get to our smart NICs and smart networking fabrics so three major architectural announcements this week that we think are pretty Zen-like.

And trust me, we have a few that are still cooking back in the labs that we are going to look forward to talking to people about that we think are a pretty dramatic step forward and well beyond anything that was talked about yet and some that might not be talked about for a couple of years but innovation, you know the geek is back.

You can watch the full interview here: