Intel Arc Alchemist desktop roadmaps have been leaked, the company has already missed their launch target

Over the past few weeks Intel has been busy with their Arc press tour. Intel’s Tom Petersen and Ryan Shrout have revealed and confirmed two desktop GPU models: A750 and A770, including their Limited Edition designs that should become available to customers at some point in the future. The only problem with this tour is the lack of details: specifications, release date and price, which are clearly missing.

Last week Intel confirmed it received the first batch of Arc A750 LE cards for reviewers. Those cards are now under internal testing and should ship to tech media soon. But even here, Intel did not specify when.

It looks like Moore’s Law is Dead’s video may explain why there are so few details on Arc GPUs. According to leaked internal roadmaps, Intel might be communicating conflicting information about ARC internally and externally, which is just fueling the confusion surrounding the launch of the Alchemist series.

Those slides were supposedly shown about a month ago by Intel graphics division to other Intel divisions. The roadmap clearly lists all known SKU names and shows that AIC (custom board) launch was planned for early August. This month and especially this week should be the time Intel and AICs ship cards to system integrators.

According to the AIC roadmap that covers one SKU specifically (A380), Intel still did not know the release date for any of the custom designs just one month ago. What this roadmap confirms is that at least five models were planned, but we already know about two (Gunnir and ASRock). The others should be ASUS, MSI and possibly Gigabyte. 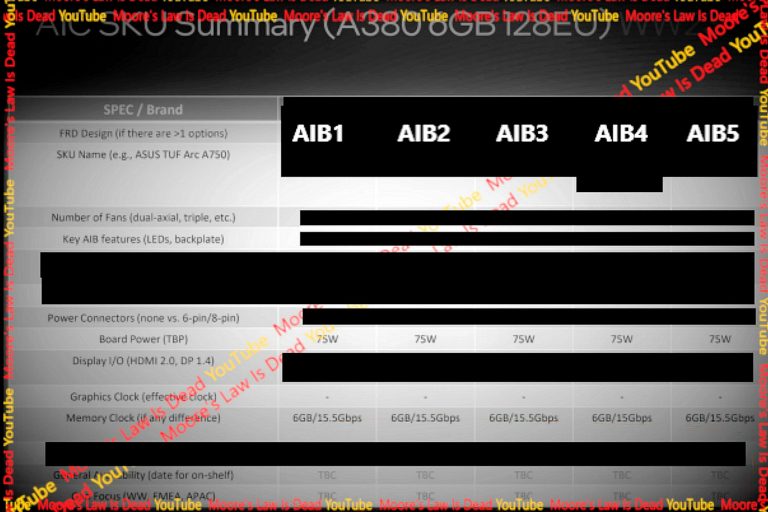 Another slide from the leaked roadmap shows that Intel had plans to launch Arc A770, A750, A580 and A380 to system integrators by the end of July. Neither OEMs who were supposed to manufacture those cards, nor system integrators have announced systems equipped with such GPUs. Thus far the only model that has been seen in prebuilt PCs is A380. 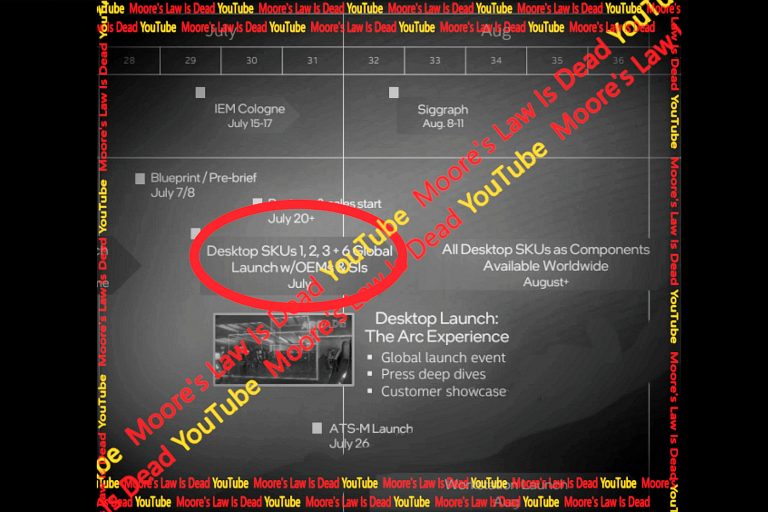 This slide also mentions ‘Desktop Launch: The Arc Experience” which was supposedly planned as a global launch event for the desktop Alchemist series. Thus far Intel did not confirm that any such event would take place.

Lastly, Intel’s latest roadmaps show confusing messaging about Intel Arc desktop ‘Story’ being revealed in September. The slide specifically says ‘not Launch” which may simply be a poorly worded roadmap info, or an actual confirmation of a delay to September. 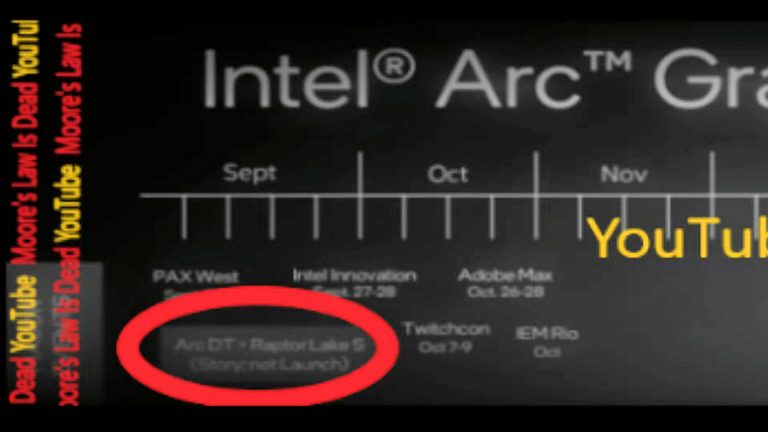 MLID also revealed that there are rumors about a potential Alchemist refresh for laptops. He also noted that there are reportedly issues with Battlemage GPUs already. All that considered, there are clearly some serious issues at Intel graphics division fueled by poor public messaging and lack of communication with board partners.

Intel’s CEO Pat Gelsinger said during a Q2 2022 earning that the company would indeed launch Arc A5 and A7 desktop cards in the third quarter, however, no specific timing is mentioned. Arc GPUs are already available through OEMs, but in this case he means mobile series only.

For AXG, while we will not hit our GPU unit target, we remain on track to deliver over $1 billion in revenue this year. In Q2, we started to ramp Intel Arc graphics for laptops and OEMs, including Samsung, Lenovo, Acer, HP and Asus. COVID-related supply chain issues and our own software-readiness challenges caused availability delays that we continue to work to overcome.

Intel Arc A5 and A7 desktop cards will start to ship in Q3. Our energy-efficient blockchain accelerator Blockscale achieved a major milestone in Q2 with revenue shipments to our lead customers, going from tape-in to shipping in less than a year. We expect to ship millions of units this year, not originally in our forecast.

One should also note that the Accelerated Computing Systems and Graphics Group (AXG) had a bad quarter with over 507M operating loss. Poor messaging, delayed products and questionable business profitability are met with rumors that Intel might even be evaluating a cancellation of its discrete GPU business altogether, as revealed by Coreteks. 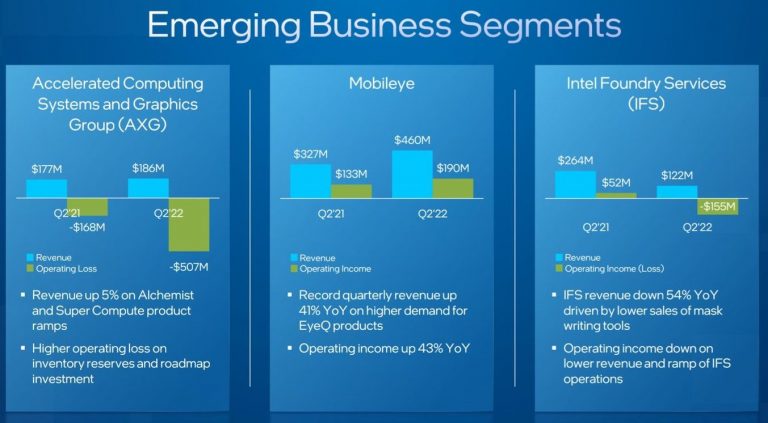