Over at Twitter, HXL (@9550pro) shared a slide outlining Intel’s plans for DG2 GPUs for laptops.

A slide titled “DG2 Graphics Memory Configuration” features as many as five SKUs. The table also mentions ‘DG2 NB SKU’ which confirms this is the upcoming ARC Alchemist lineup for notebooks

According to this chart, the flagship part SKU1 with 512 Execution Units will be paired with eight GDDR6 memory modules featuring a total of 16 GB of capacity. This memory would be clocked at 16 Gbps, the same speed as the recently announced GeForce RTX 3080 Ti Laptop GPU. Such a graphics card with a 256-bit memory bus would offer up to 512 GB/s of bandwidth. 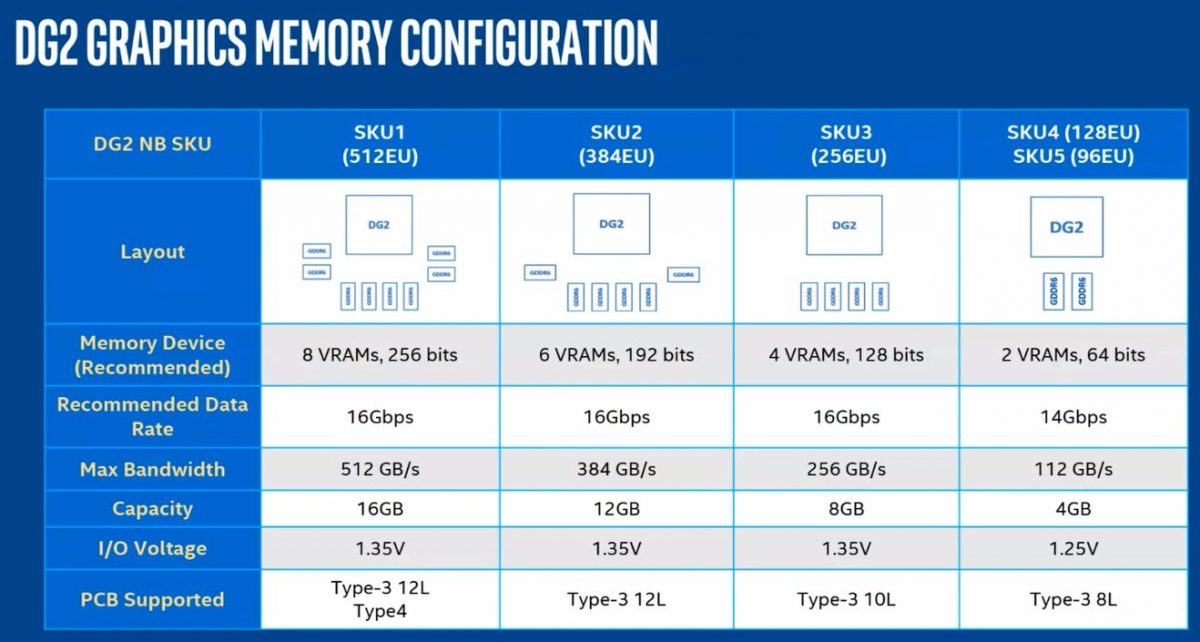 Furthermore, we finally have a confirmation on a cut-down DG2-512EU GPU with 384 EUs internally called SKU2. This variant is to launch with 12GB GDDR6 memory across 192-bit memory. It would retain the same speed as the flagship part, which gives maximum bandwidth of 384 GB/s.

Intel ARC Mobile “SKU3” is a 256EU based model with 8GB of GDDR6 memory and a 128-bit memory bus. It would also feature 16 Gbps memory but only half of the modules the flagship part is said to offer. This means that the bandwidth will be halved to 256 GB/s.

Finally, the SKU4 and SKU5 are based on a DG2-128EU GPU, both featuring 4GB GDDR6 memory and 64-bit bus width. The memory speed would be limited to 14 Gbps which means the maximum bandwidth would reach 112 GB/s.

Overall, this leaked slide gives us the first confirmation on all cut-down DG2-512EU variants, which may also make their way to the desktop. In fact, it would be very strange if they wouldn’t. There is no sign of the rumored 448 EU variant though, so there will be a 1/3 core count gap between the flagship mobile ARC GPU and 384EU variant. We do, however, expect the 448EU model to make its way to the desktop series.