The full specs of the upcoming Arc A-Series are still unknown and will likely remain so for the next few weeks as we approach the launch. What we do know is that Intel is planing a ‘Limited Edition’ of Arc Alchemist desktop card, possibly implying that it will be some sort of the flagship model with offering the highest performance. Previous leaks have suggested that this part could be called Arc A780, but we have not seen any performance leak featuring this part for a while. 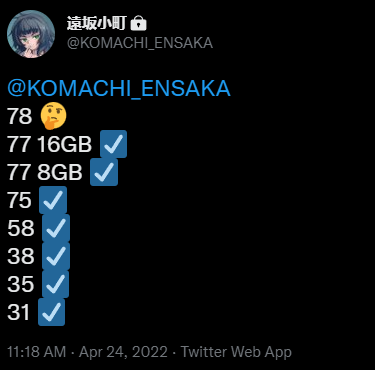 The Arc A770 desktop model with more than 12.7GB of VRAM (so likely the 16GB variant) had appeared 10 days ago in a Geekbench leak. It seemingly confirms that A770 will sport full ACM-G10 GPU with 32 Xe-Cores. What the tweet from Komachi suggests though is that Intel might be planning another part with half of the 16GB VRAM, so 8GB. It would probably make sense if this part kept the 256-bit memory bus.

For now, there is no sign of the 448 Execution Units (28 Xe-Cores) SKU, which did appear in some leaks. One might guess though that A770 8GB or A750 would be good candidates for this configuration, but again, there is no leak that would confirm yet.

Komachi’s tweet includes the A350 part, which has not been mentioned since the Intel driver leak. This was supposed to be the cut-down ACM-G11 part, possibly with 6 Xe-Cores. That said, one could guess that A380, A350 and A310 would feature 8, 6 and 4 Xe-Cores respectively. All of these parts are entry-level series, targeting RTX 3050/RX 6500 performance at most.

At this moment, Intel has not confirmed the launch date of Arc Alchemist desktop series. The company officially plans to launch the Limited Edition SKU in summer this year, while rumors suggest Arc A-series desktop is delayed till late Q3.

The chart below is a prediction based on the latest information. The specifications are subject to change.