It has been almost a week since the first Intel Arc GPUs were announced, but some details are still missing.

Tom Petersen, Intel Graphics Innovation Fellow, who previously worked for NVIDIA, is now busy doing interviews for the media following the launch of Arc Alchemist Mobile GPUs. The company only launched two SKUs out of five, and even then they are not yet easily available for sale yet.

One of the most discussed topics after launch was the relatively low Graphics Clock of Arc A-Series mobile GPUs. Those aren’t really that much different in terms of a frequency from AMD or NVIDIA’s base clocks, but they are not the same by definition. What Intel failed to explain at the launch event, is how much higher can those clocks be, which left the impression that this might be the max clock, but fortunately is not the case.

During HotHardware’s live interview, Petersen explained that Arc’s “Graphics Clock” is not comparable to AMD or NVIDIA “Base Clock”. This Intel clock metric has been explained as an average clock measured in TDP constrained environment. This value is estimated per each Arc SKU based on a large number of chips. Petersen added that this is essentially the slowest clock that Intel saw in a batch.

As an example, Petersen clarified that for Arc A370M SKU, the 1550 MHz clock is the minimum average clock that consumers will see regardless of the laptop design or the ‘Graphics Power’ variant of this specific chip. In this sense, the 1550 MHz clock applies to 35W SKU (think NVIDIA Max-Q or AMD RX 6000S series) and will almost certainly be higher for the 50W variant. The frequency will also depend on a workload, in games such as Counter Strike, gamers should see GPU clocks above 2 GHz, Petersen explains.

As a confirmation, a few days ago this GPU-Z screenshot has been posted on the Chinese social media platform. What we can say is that we confirmed with the GPU-Z developer that the 2.2 GHz GPU clock for Arc A350M GPU shown here is real. Naturally, the memory clock is not, and this is something that still needs to be fixed (the software only has preliminary support for Arc GPUs). 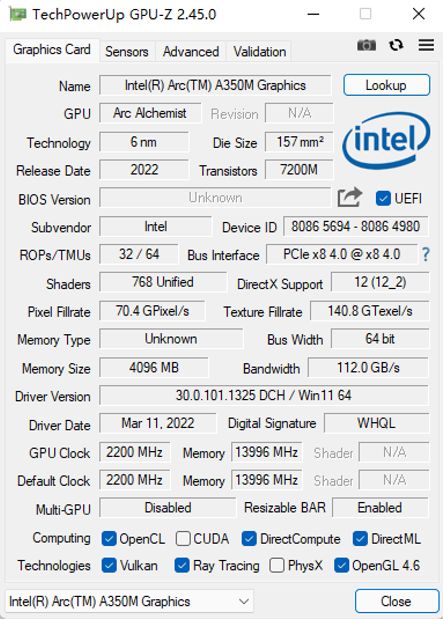 Therefore, gamers shouldn’t worry about low Arc Graphics Clocks, because in most cases they certainly be higher. What is a shame, though, is that instead of using similar definitions for GPU frequencies, Intel clocks are technically incomparable with competing chips, at least in terms of raw specs on paper. This will certainly add a new layer of confusion when comparing chips side by side. However, once we get to add-in-board cards for desktops, those frequencies will make a lot more sense and should be easier to understand, Petersen says. Desktop Arc GPUs are now set to launch this summer.