Although Intel discrete desktop Arc A7 GPUs were already tested by international media, Intel has not provided an official price for the European market. The A770 Limited Edition, which is Intel’s own design with 16GB of VRAM, will officially cost $349 and should be available through major retailers in the US.

When it comes to availability in other regions, Intel was less keen on sharing details. However, it seems that Geizhals has now picked up on two German retailers who had or still have Arc A770 listed for 431 to 461 EUR. In fact, it appears that the product is in stock and ready for shipment, which is two days ahead of official launch. Update: no longer in stock. 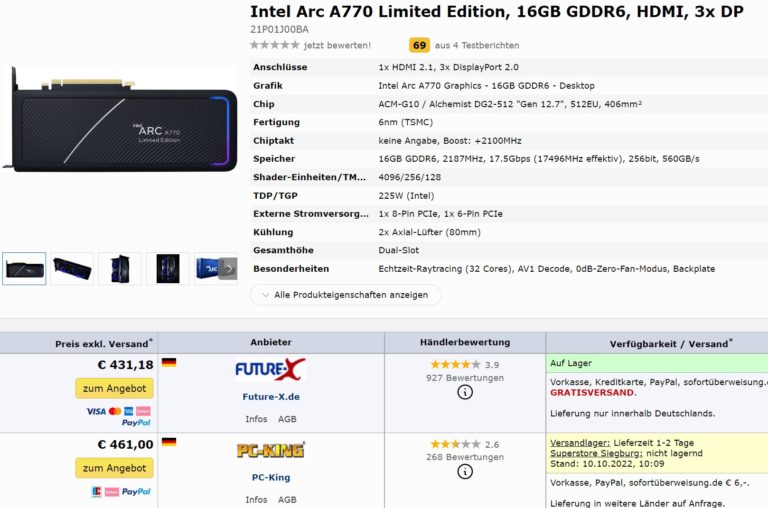 This price shouldn’t come as a surprise, though. It matches USD to EUR conversion with added VAT for Germany: €359 + 19% ≅ €428.4. Unfortunately, there is no sign of the A750 GPU either from Intel or board partners. In fact, there is no sign of any custom Arc GPU on sale yet, but this might change in a matter of hours or days.

One should also mention that Intel is giving away $370 worth of software with Arc A7 desktop GPUs. This includes COD Modern Warfare 2 PC game or very popular Topaz Gigapixel AI software among others.