Intel Arc A770 GPU can hit 2.7 GHz clock in Hitman 3 when optimized

Intel Fellow, Tom “TAP” Petersen was invited by HotHardware for a Q&A session with their community. As usual, Petersen answered many questions on Arc GPUs, and as usual, he did not comment on the release date.

By far, the most interesting part was at the very end, when TAP revealed details on Arc A770 overclocking. With some voltage curve modifications and power limit adjustment, the card has reached a stable clock speed of 2.7 GHz. Officially, the A770 has a graphics clock of 2.1 GHz, but it was already demonstrated with 2.5 GHz during gaming demos.

As noted, this was not a cherry picked GPU, but a randomly picked GPU for a quick undervolting and overclocking session in Hitman 3. Petersen also confirmed that the card reached 228W power consumption, which is just 3W more than official TBP (Total Board Power).

New slides were also shared, including details on the Limited Edition series (Intel’s own design) for A770 and A750 GPUs. Both cards are equipped with the ACM-G10 GPU, but the former will have full core specs and twice the memory (16GB). Interestingly, both models will have the same TBP of 225W. 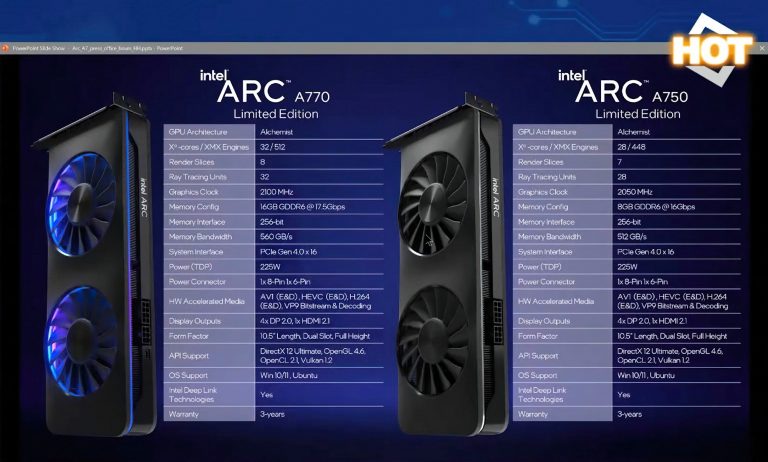 Over at Intel website, one can find an updated spec sheet for the Arc Alchemist desktop series. Intel has now split the A770 into 8GB and 16GB models, which are now confirmed to have difference clock memory clock speeds (16 Gbps and 17.5 Gbps respectively). Furthermore, Intel confirms A580 mid-range GPU TBP at 175W. That said, the full lineup of Arc desktop GPUs will feature five models, with no sign of A310/A350 GPUs. 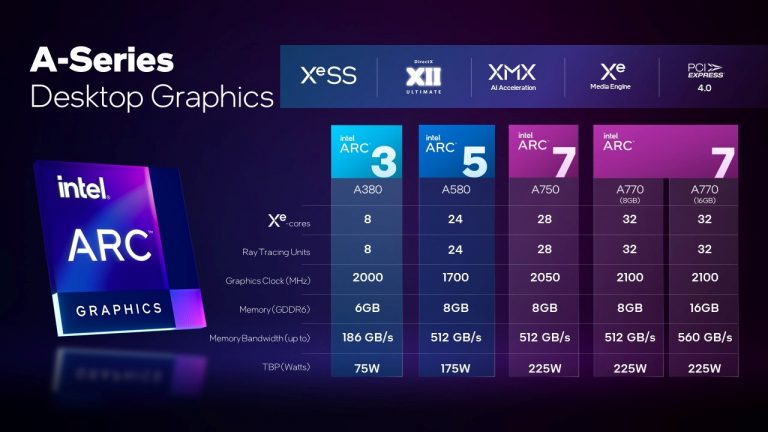 Intel has entered a silent mode now and representatives do not say anything about potential release date. It is, however, very likely that we will hear more about Arc desktop at Intel Innovation event on September 27th, just as the company is set to announce the 13th Gen Core “Raptor Lake” series. After all, both products are for desktops.