The Arc A770 graphics card that was tested with Puget Bench DaVinci Resolve benchmark, appears to be using a new driver branch that has not yet been released to the public.

Typically, unreleased hardware uses older or completely different branches of drivers. In this case, we are looking at 30.0.101.1723 driver that is much newer than official Intel Arc ‘1330‘ and iGPU driver ‘1660‘. What this means is that the upcoming Intel Graphics driver might already have support for desktop Arc GPUs, but the timing for its release is not yet confirmed.

Although Intel already launched its “Arc” GPU series for laptops on March 30th, dedicated drivers are still not updated as frequently as expected. The last driver dated April 8th has brought several fixes, but lit of known issues is still very long. Unfortunately, Intel has not clarified if they are ever intend to merge both branches of drivers. For now, Arc GPUs use their own version, which ships with Arc Control software.

As for the leaked benchmark itself, PugeBench DaVinci test is not really a GPU benchmark, so it is not very useful for comparisons. In fact, we can easily find GeForce RTX 3060 scores with more than twice as high overall or ‘GPU Effects’ scores, which means that either the GPU or the CPU were not running at their full potential. 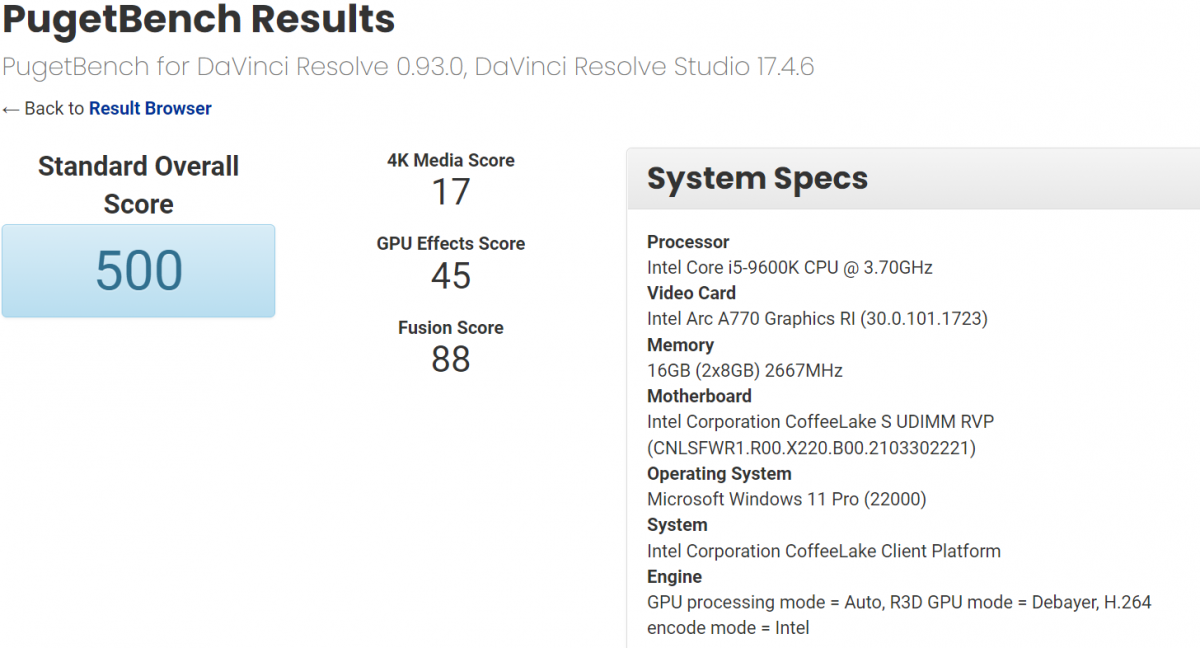 Interestingly, we often see Intel Core i5-9600K CPU along with these early Intel leaks, possibly because this is an internal testing platform used by Intel employees. To add to this, the motherboard labeled as “CoffeeLake S UDIMM RVP” is an engineering board, not something one can easily buy at a random PC store.

The Arc A770 is the upcoming ACM-G10 based desktop graphics card, rumored to launch with either 16GB or 8GB GDDR6 memory. According to previous rumors, this part might target GeForce RTX 3060 or even RTX 3070 series in terms of performance. However, we are yet to see a benchmark leak that would provide meaningful and comparable data.