It looks like Intel is now testing its desktop A580 GPU. This is the first known benchmark of the graphics card.

Intel A580 is a bit of a mystery. While the company marketing efforts are now focused on the flagship Arc A7 series, reviewers and gamers only have access to the A380 entry-level model. The upcoming A580 SKU based on a more powerful GPU would definitely improve Intel’s situation.

Over at Ashes of the Singularity benchmark website one can find Intel Arc A580 running alongside Intel engineering sample CPU with 16 cores. This CPU could really be anything, not necessarily a Raptor Lake processor. We are most likely looking at a test platform either from Intel or board partners who are now preparing for the launch of the new graphics card. 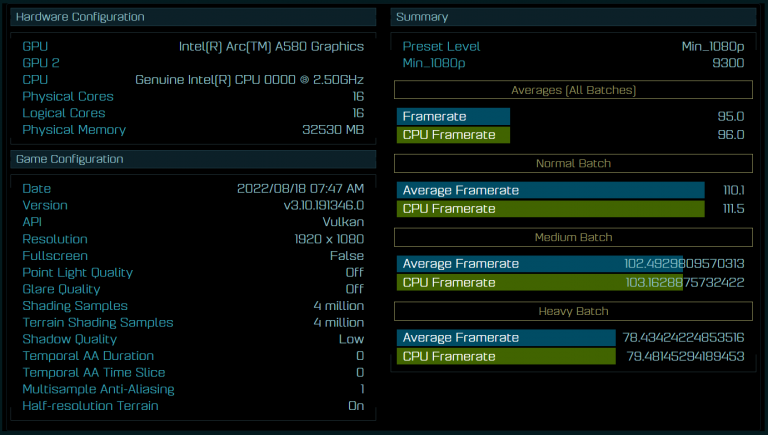 The GPU was tested in Minimum 1080p preset where it scored 9300 points and average 95 FPS. Although Ashes of the Singularity was one of the first games supporting DirectX12 API, this A580 has been tested with Vulkan API instead. There aren’t that many results for this API in the database, but RTX 3060 scores 75 to 96 FPS with the same preset. Naturally, AotS provides no information on system specs such as memory configuration or whether ReBAR was enabled, so this score is far from accurate.

The A580 is not meant to compete with the RTX 3060, though. Officially Intel declared the A750 as its competitor, which undoubtedly has more cores. However, neither A750 nor A580 have official specs yet. Rumors point towards 16 Xe-Cores on this GPU and 8GB GDDR6 memory, so essentially half of the A770 specs.

Source: Ashes of the Singularity DB