Intel Arc A370M has been benchmarked in Ashes of the Singularity

The Arc Alchemist discrete GPU series from Intel might not be here yet, but the testing has clearly started, as the first benchmark result has just leaked.

The first GPU benchmark is “obviously” the Ashes of the Singularity in-game test. Years after the release, this benchmark is still being used by many reviewers and engineers evaluating the graphics performance of new chips.

Naturally, we have to mention that this benchmark is not very accurate for any type of comparison. Nor does it offer any important details on the tested GPU. In this case, we just learn there is an Arc A370M graphics being tested on a laptop equipped with Alder Lake i7-12700H processor.

What we do know about the Arc A370M is that this most likely the full implementation of the DG2-128EU GPU, equipped with 4GB GDDR6 memory and 64-bit bus. It’s a low-end discrete GPU solution that should offer twice the performance of an integrated Xe-LP GPU, according to Intel.

The A370M has been tested twice in Min_1080p preset using DirectX 11 API. It scored 3500 and 3600 points with an average framerate of 36.9 and 38.3. Such a score is obviously not very good, and it takes quite some time to find entries in AotS database with results. This also perfectly demonstrates how bad AotS is for modern GPU testing – the results are all over the price – we get GPUs like desktop GeForce RTX 3060, Ryzen 5 5600G with integrated Vega graphics or even GTX 1050 all with the same score.

So how fast is Arc A370M? Well, that’s impossible to say right now. 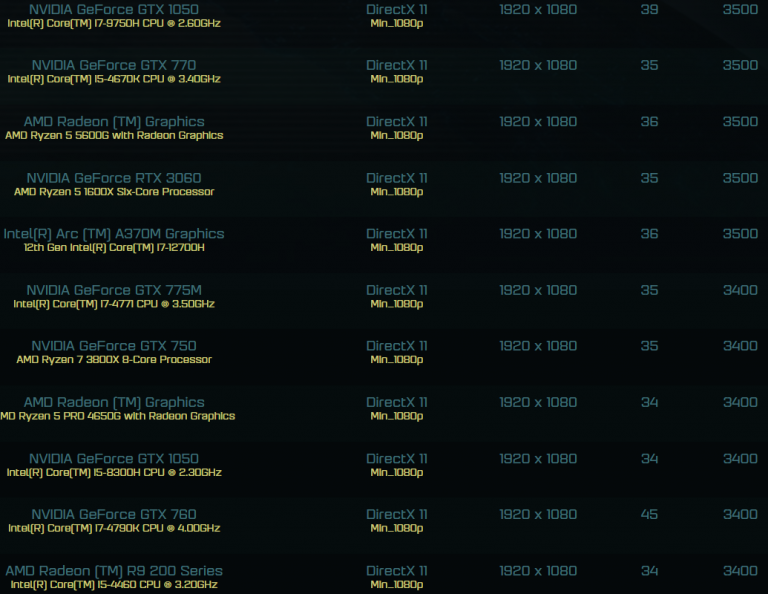