Although Intel Arc Mobile series were announced yesterday, we are yet to see independent reviews featuring the new ACM graphics processors.

Intel Arc A350M is the slowest Alchemist SKU in the full lineup. This part only has a TDP between 25 and 35W, clearly targeting the low-end discrete GPU market and ultra-thin laptop designs. This is the first part that appears in the first non-official benchmarks. Arc A350M graphics processor has been tested using Samsung Book Pro2 laptop. 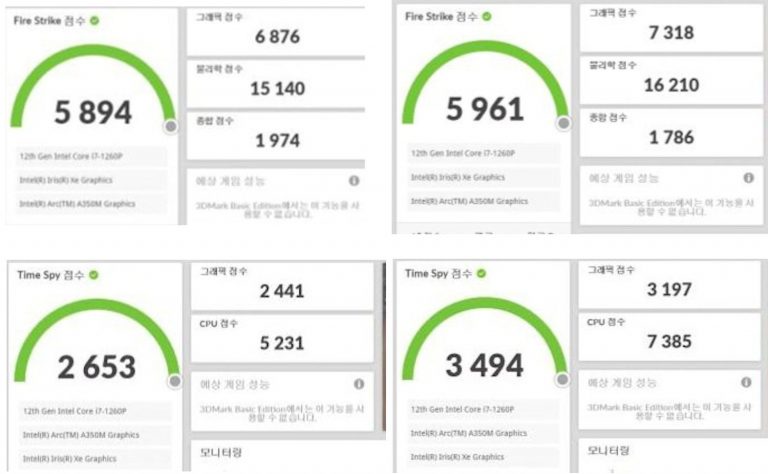 The ARC A350M is not the fastest chip around. The scores that were posted by @harukaze5719 feature Default and Performance power profiles, but even with increased performance they still can’t compete with GeForce RTX 3050 Laptop GPU, the slowest Ampere GPU in the 30 series. However, the A350M is quite close to MX570 (also featuring GA107 GPU).

Based on those numbers, ARC A350M is 16% faster than Intel Iris Max (based on full DG1 chip) in Fire Strike test and 70% faster than Time Spy. Intel spent a lot of marketing to underline the fact that Arc series are designed for DirectX12, and this clearly shows here.

The Arc A350M is stuck in between GeForce GTX 1650 Ti and GTX 1650 Max-Q series. However, unlike those NVIDIA parts, the Arc A350M supports both the Ray Tracing hardware acceleration and Intel’s own XeSS AI-upscaling. The latter is not yet available, though.