Thus far, Intel only launched one Arc desktop GPU, the A380, which is not exactly a gaming card. This A3 GPU only trades places with AMD Navi 24 or NVIDIA low-end Turing GPUs. However, Intel thinks that there is still room for an even slower part called Arc A310.

The A310 appeared yesterday on Intel website along with official specs. Intel has confirmed that this card features 6 Xe-Cores, so it’s a cut-down ACM-G11 GPU. Furthermore, it ships with 4GB GDDR6 memory across 64-bit interface, which is again a limitation compared to the full chip (96-bit).

Intel’s newest low-end GPU has the same TDP as the A380, which is 75W. The card is listed with PCIe Gen5 4.0 x16 support, but that seems unlikely considering A380 is already limited to 8 lanes.

There is also a question about the clock speed. The A310 is once listed with 2100 MHz Graphics Clock and later 2000 MHz elsewhere. Hopefully, Intel can clarify which value is correct, but at the same time we will probably be seeing various implementations featuring both clocks. 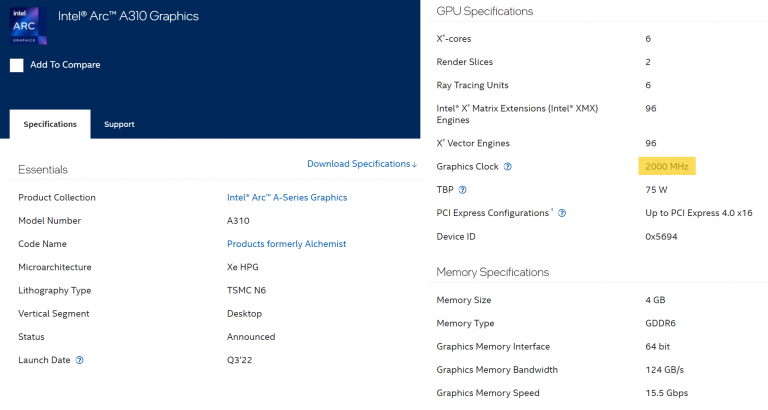 The A310 is likely to appear with low-profile cooling solutions, just as we saw from MSI and early pre-production models. Such limited specs suggest we might not see the rumored A350 SKU though, which was expected to feature exactly 6 Xe-Core, while A310 was believed to feature four. According to intel, this GPU is now officially announced, and it should ‘launch’ in Q3 2022. That we find that very unlikely, though, because that leaves only 3 days for launch.