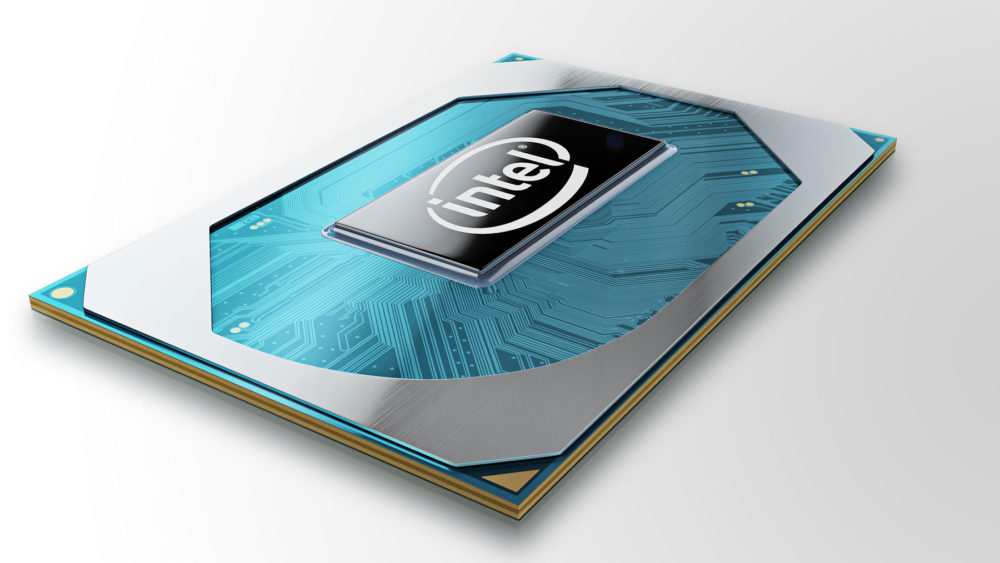 Intel announced its yet another 14nm series of processors for high-end gaming laptops. The series is based on Comet Lake-H architecture.

The flagship Core i9-10980HK processor has eight cores and sixteen threads, which is a similar configuration to recently announced AMD Ryzen 9 4900H (or Ryzen 7 4800H). Both series are competing in the 45W TDP segment, although this value is fully configurable in both ways.

The Core i9 processor in the Comet Lake-H series will boost up to 5.3 GHz (which is a Thermal Velocity Boost frequency). The TVB relies on temperature targets and power envelopes, and those can be configured by laptop makers. The 10980HK is the only fully unlocked CPU in the series, which means it is overclockable.

Intel promises 30+ premium ultra-thin 20mm laptop designs and more than 100+ laptops with Core H-series on board. 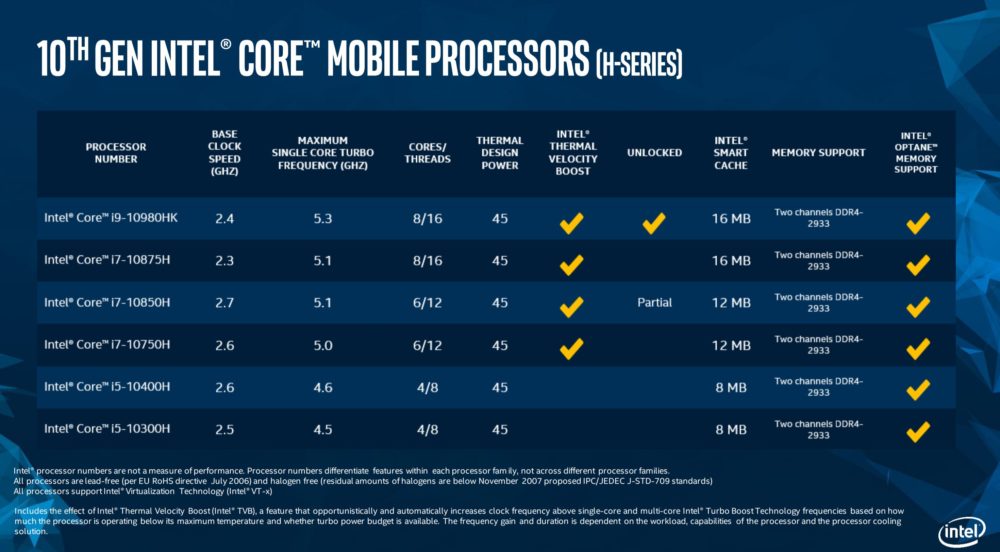 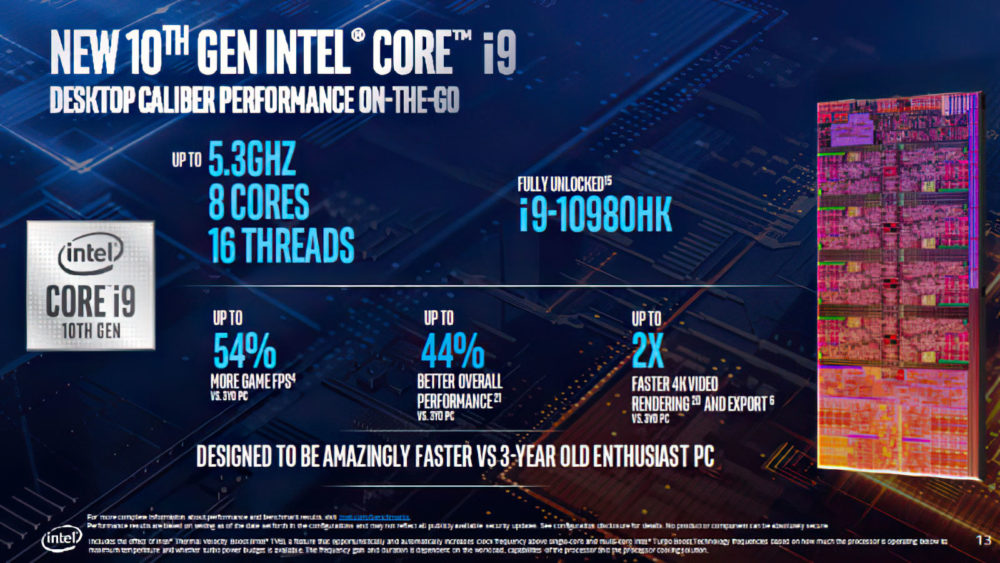 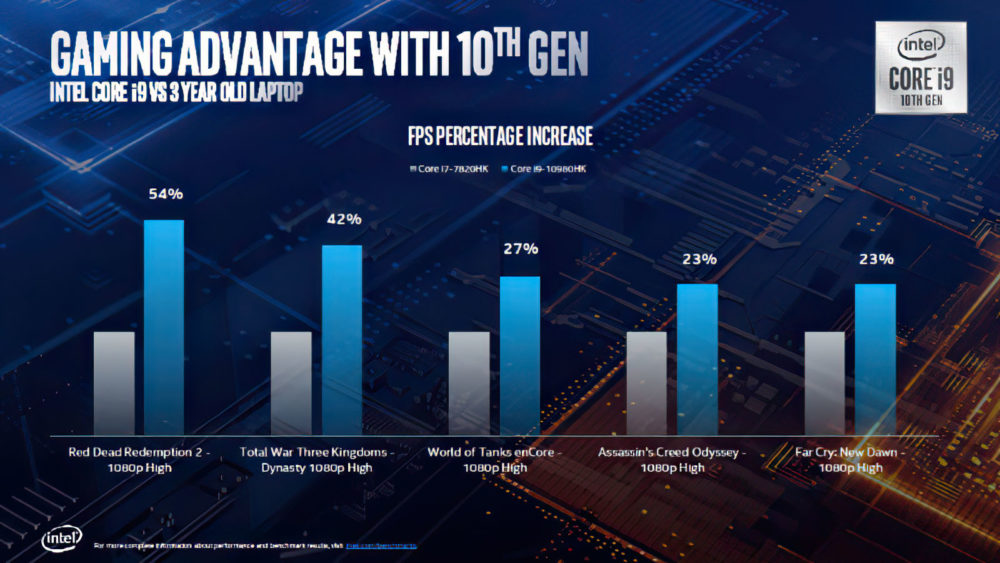 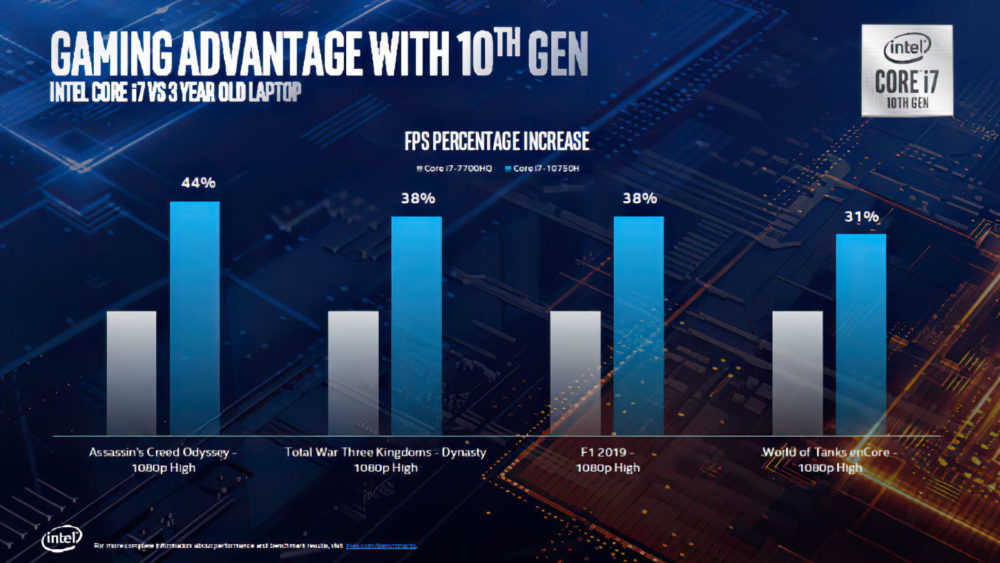 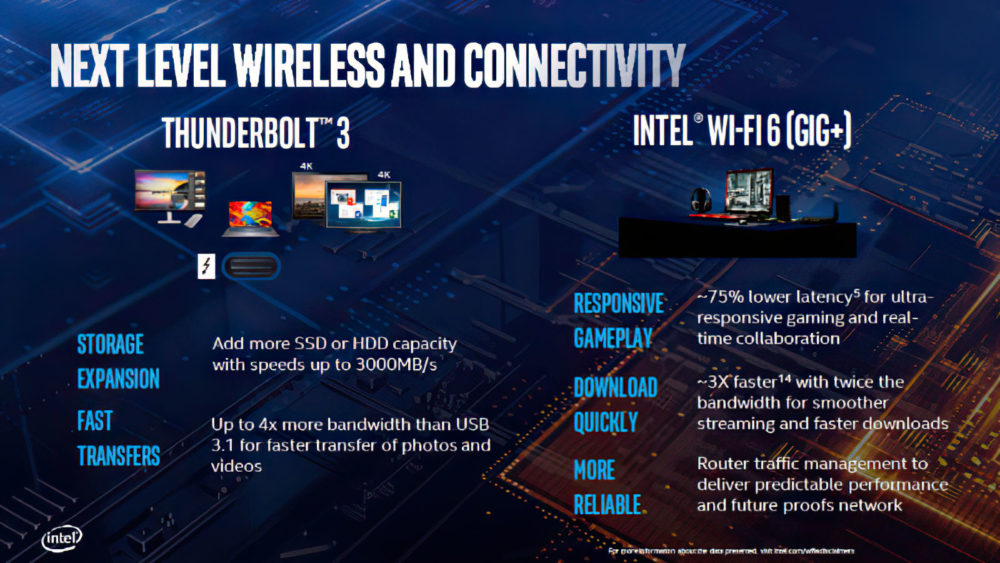 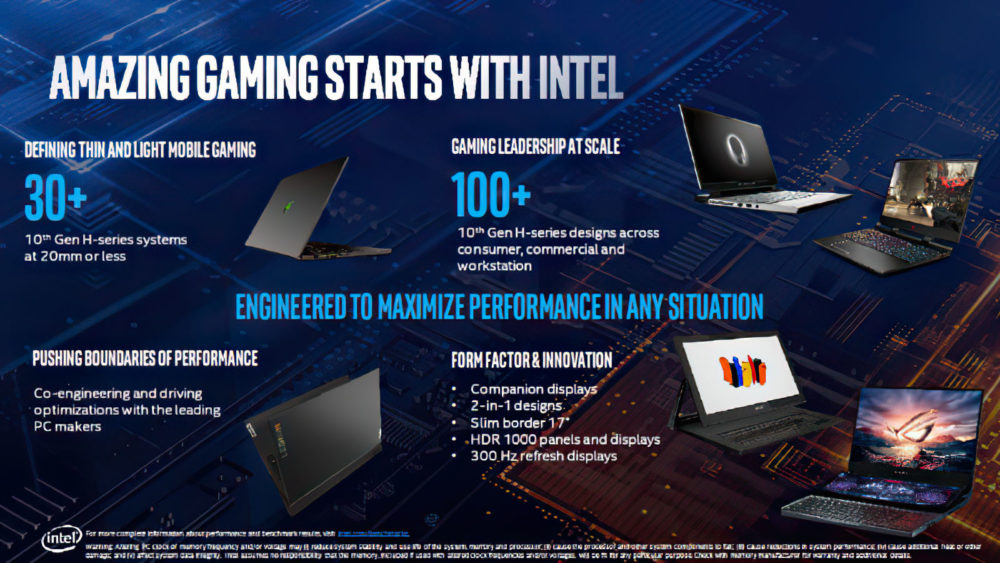 “Today’s introduction of the 10th Gen Intel Core H-series mobile platform extends Intel’s gaming leadership, delivering desktop-caliber performance in a mobile form factor and breadth of choice with more than 100 laptop designs launching this year, including more than 30 thin-and-light systems. The new platform is optimized for enthusiasts and creators by delivering the fastest frequency in the industry with 5 GHz across the majority of the volume which will deliver amazing game play and rich creation for users.”
–Fredrik Hamberger, general manager of the premium and gaming laptop segments at Intel

Why It’s Important: Gamers are moving increasingly toward mobile systems and they care about the flexibility of gaming where they want to as much as they do the raw performance of their systems, ranking processor speed in their top three most important features2. Packed with incredible performance typically only available from desktops, 10th Gen Intel Core laptop processors deliver faster performance with up to 5.3 GHz3 Turbo, eight cores and 16 threads to enable immersive gaming experiences with amazing responsiveness and consistent in-game performance. Games and applications continue to depend on high-frequency cores and Intel is pushing the frequency envelope to achieve lower latency and deliver the best PC gaming experience on a laptop.

More about the Fastest Mobile Processor4: At the top of the stack is the 10th Gen Intel Core i9-10980HK, featuring unparalleled performance across the board with up to 5.3 GHz Turbo, eight cores, 16 threads and 16MB of Intel® Smart Cache. The unlocked 10th Gen Intel Core i9-10980HK processor powers the ultimate laptops for gamers and creators, allowing further customization, optimization and tuning of the CPU’s performance.5

Compared with a three-year-old system, the i9-10980HK delivers:

The 10th Gen Intel Core i7-10750H processor with up to 5.0 GHz3 Turbo is purpose-built for enthusiast gamers and creators demanding optimized performance. Compared with a three-year-old system, i7-10750H delivers:

How It is Optimized for Amazing Gaming: Engineered in collaboration with leading PC manufacturers, more than 30 thin-and-light systems measuring 20 mm or less in thickness and 100 designs across consumer, commercial and workstation segments will launch this year. Intel also optimizes laptops with PC-makers to support the latest technologies, including: