Russian Federation and Belarus cut from CPU and GPU shipments

Customers looking for new Intel processors in Russia will soon have to travel abroad to buy one.

Intel and AMD have both confirmed today it will suspend all shipments to Russia and Belarus amid sanctions imposed by the governments in respective countries. What this means is that both countries are now cut off from a global supply of the latest technologies for both the consumer and data center (supercomputer, military, networking) sectors.

Intel has condemned the invasion of Ukraine by Russia and has confirmed it raised a $1.2 million for the relief effort through employee donations and matching campaign. 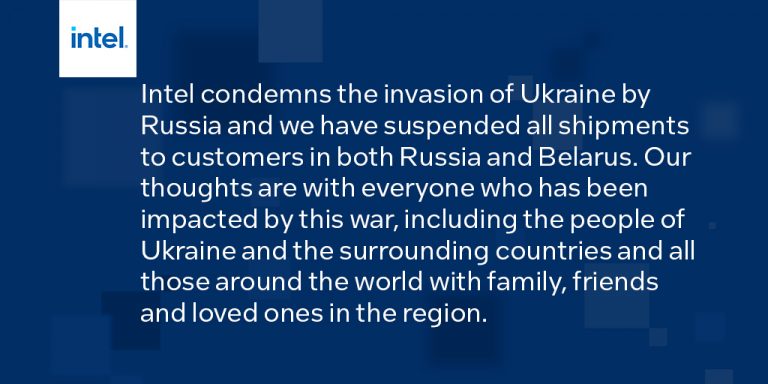 Intel is now calling for the immediate end to the war and ‘swift return to peace’.

Furthermore, there is an official confirmation from AMD that the company also suspended sales and distribution of its product in Belarus and Russia.

Those statements arrive after a few days since the first reports of a shipment ban. According to initial report from a Russian media called RBC, the shipment of both AMD and Intel processors have been suspended. At the time, the publication was unable to verify this information with Intel and neither of the two company made public statements.

A representative of the Association of Russian Developers and Manufacturers of Electronics (ARPE) confirmed the suspension of deliveries of Intel and AMD products. And the representative of Intel in Russia did not directly answer the question whether the company stopped the supply of processors.

The ban should not have an impact on global sales, as Russian government accounts for only 0.1% of global shipments, notes Tom’s Hardware. However, the shipment ban is to expand into other products as well, as TSMC, the world’s largest semiconductor company, is reportedly complying with the sanctions. This means that even the home-grown and TSMC-made Baikal chip will not be shipped to Russia.