The YouTuber has previously revealed confidential information on Intel products that later turned out to be true. Moore’s Law is Dead also has posted Intel Xe-HPG desktop GPU prototype photos, further confirming that his sources are not to be ignored when it comes to Intel leaks.

Today MLID revealed the details on Alder Lake (ALD) CPU configurations, including S1 and S2 desktop models with 8 Golden Cove (High Performance) and 8 Gracemont (High Efficiency) cores. The S2 configuration would receive 6 Golden Cove cores and no Gracemont core. He further details P1 and P2 mobile Alder Lake SKUs which are both to offer 8 Gracemont cores but only 6 and 2 Golden Cove cores respectively. As he notes, Intel’s dependency on high-efficiency cores grows as power requirements increase. This is why the last configuration known as M has only two big cores and as many as eight small cores. 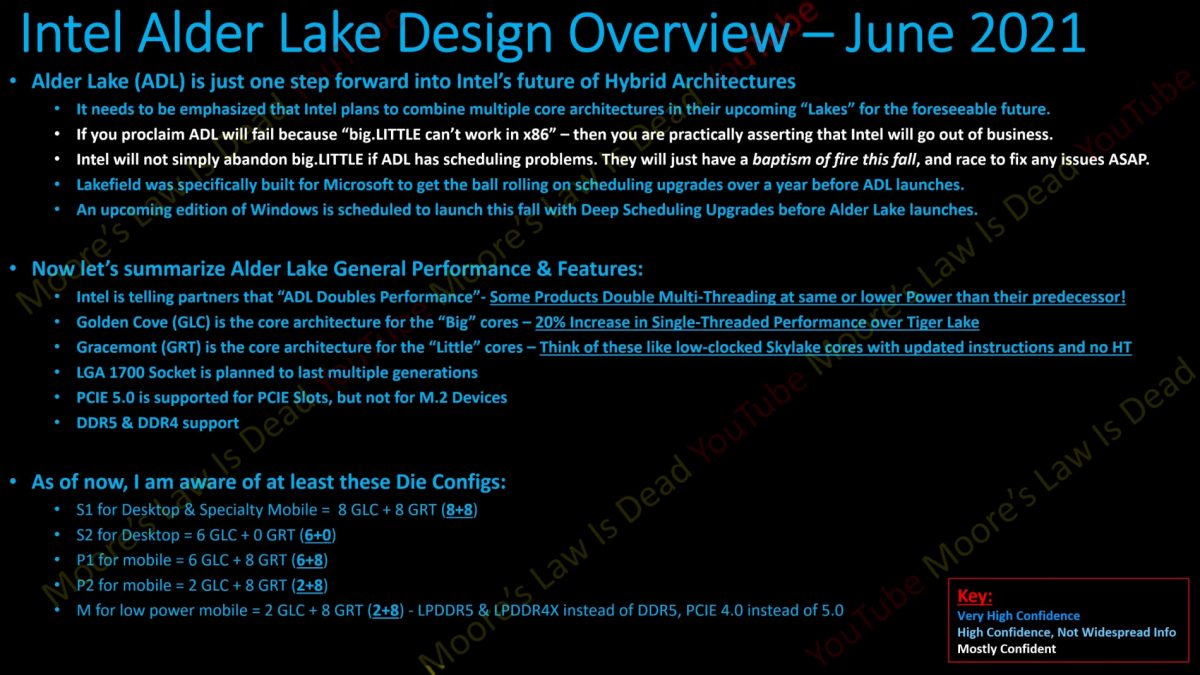 Furthermore, MLID claims that Intel will lift the embargo on Alder Lake on October 25th. It is unclear if this is a possible product announcement date or some kind of an internal embargo. Intel would allegedly launch its K-Series SKUs first, namely the 125W TDP SKU.

It’s also worth noting the appearance of the HX series. These are high-performance mobile chips that combine desktop-class PCH and CPU dies on to BGA socket. These would likely extend or succeed the current HK series (unlocked high-performance chips) and serve as a counterpart to the AMD Ryzen HX series. Alder Lake HX series is allegedly coming in the second quarter of 2022 with TDPs ranging from 45 to 65W. 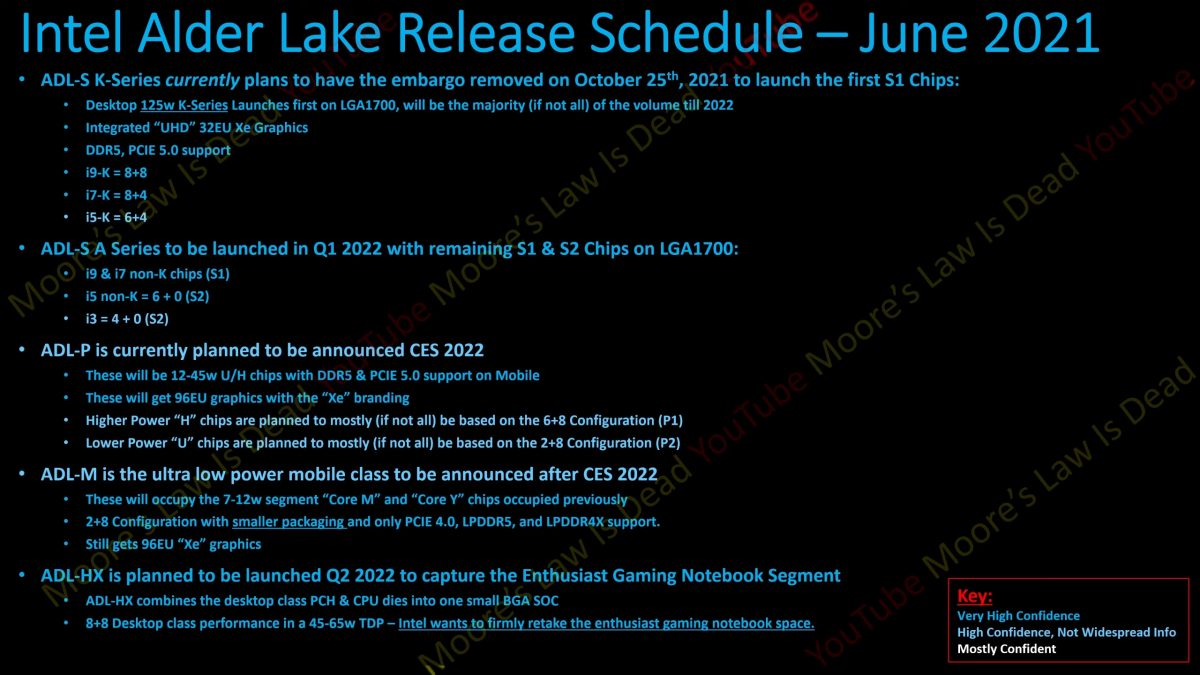 Moore’s Law is Dead also revealed details on Raptor Lake, a successor to Alder Lake which would also support the LGA1700 socket. The series allegedly feature cores codenamed Raptor Cove which would replace Golden Cove from Alder Lake. The CPUs would still feature high-efficiency Gracemont cores, however, Intel would be doubling the number of these cores in the upcoming CPUs (aka 13th Gen Core series). In other words, the Intel Raptor Lake series would have 8 more Gracemont cores than Alder Lake. The updated Raptor Cove microarchitecture would also bring IPC, Core Frequency, and Performance/Watt, YouTuber notes. 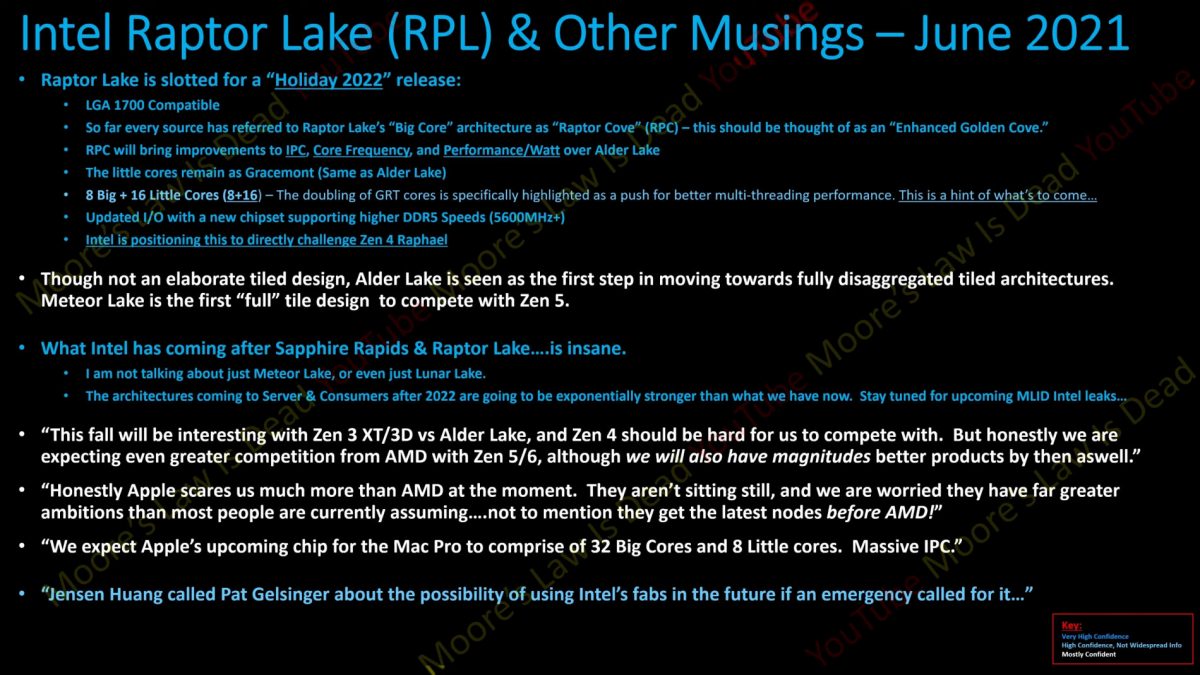 According to MLID, Intel is now expected to launch Raptor Lake during Holiday 2022 season. The codename of Raptor Lake had already appeared in previous rumors, including the slides that we shared before: