It has been a while since we had a leak featuring Sapphire Rapids-X, the alleged next-gen HEDT platform based on Intel 7 node. Intel has not updated its HEDT offering since the Glacier Falls platform for the 10th Gen Core Cascade Lake-X series. This old HEDT platform is in fact slower than the high-end Alder Lake-S CPUs that Intel just launched, making the 10th Gen Core HEDT platform obsolete outside of a few very specific use cases.

Intel clearly needs something newer, equipped with PCIe Gen5 standard and DDR5 memory technology and that’s exactly what the upcoming Sapphire Rapids series is to offer. The architecture will span across high-core count (56) Xeon Scalable CPUs to allegedly 12-core parts for mid-tier workstations. A special version of Sapphire Rapids with HBM memory will be used alongside Ponte Vecchio GPUs in the Aurora supercomputer (pictured above).

Since Intel is eager to talk about Xeon Scalable “Sapphire Rapids”, but is somehow reluctant to even admit to making a consumer version, MLID has recently reached out to his sources for an update. Some of the information appears to be conflicting with each other, such as one of the sources claiming that the Intel HEDT platform has reached the end of life. However, it is not until MLID puts all puzzles together and confirms with other sources that he realized Intel is actually going to launch Sapphire Rapids as Xeon Workstation series, instead of Core-X.

According to MLID, Sapphire Rapids is divided into two platforms, one succeeding Xeon series based on Ice Lake-X. It is to feature up to 56 cores, 8 channel DDR5 memory support up to 4400 MT/s (or 4 channel DDR5-4800), 350W of TDP, and, what appears t be the most interesting part, up to 112 PCIe Gen5 lanes.

Furthermore, there is a mainstream workstation platform, which might actually be a ‘spiritual successor’ to Intel HEDT Cascade Lake-X. Those CPUs are supposedly based on different silicon (possibly MCC with up to 36 cores). It would have up to 300W TDP (the max power of the top SKU), either 8-channel or 4 channel memory support, and 64 PCIe Gen5 lanes. 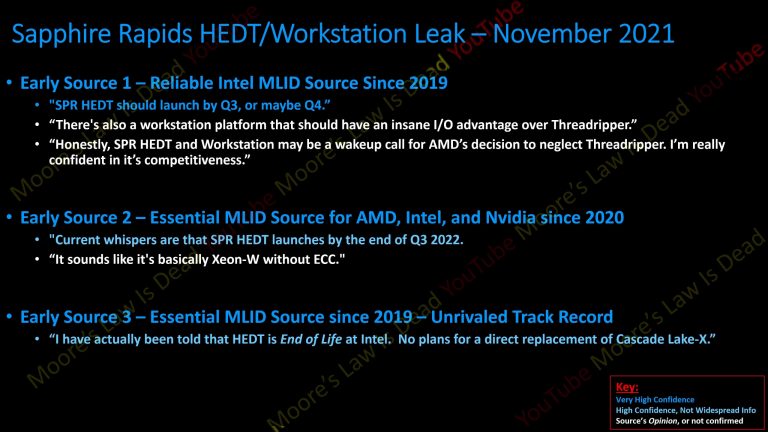 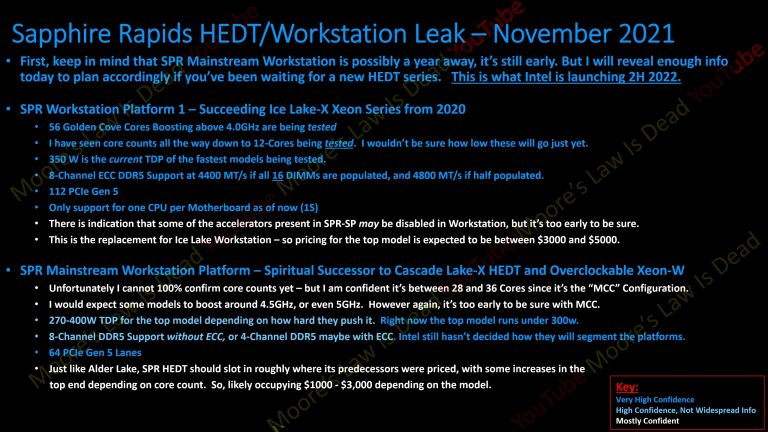 Such rumors appear to go in line with our leak featuring Sapphire Rapids as a product replacing Glacier Falls/Cascade Lake-X somewhere in the second quarter of 2022. This was the first leak that featured the Intel W790 chipset (instead of the expected X699/X799).

Naturally, this roadmap is now outdated, in fact, even the Alder Lake-S launched this quarter while the roadmap claimed it might launch in the third. Similarly, Sapphire Rapids (Fishhawk Falls) is now to be expected in the third quarter of next year, so we are still almost a year before any of these parts launch.