It has been discovered by Coelacanth’s Dream that the most recent update to Coreboot for Google Brya platform features updated Power Limit 4 for Intel Alder Lake P and M series. The Brya platform is a reference validation platform for Chromebooks.

The new data extend the power limit information with the fourth level, which is only describing peak wattage. The patch lists the wattage for four different configurations of Alder Lake CPUs:

Each number respectively describes high-performance (big) cores, high-efficiency (small) cores, and a level of integrated graphics (in this case GT2, which should offer 96 Execution Units). 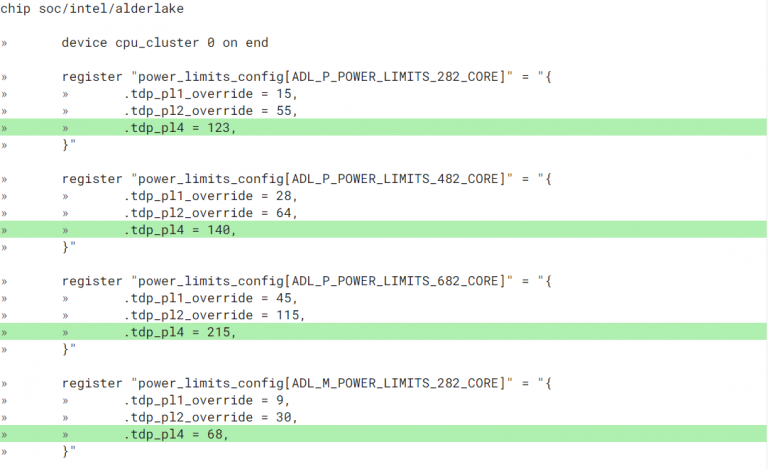 The data has been collected and analyzed by Coelacanth and compared side by side with the Tiger Lake series, which the 12th Gen Core series is supposed to replace. It is, however worth reminding that Alder Lake mobile series will be divided into 3 segments (M, P, and S), which are further divided into 6 power groups.

The data that appeared in Coreboot appears to feature Alder Lake-M U9 (9W) and Alder Lake-P U15 (15W). According to the leaks, these are supposed to represent ultra-thin designs and mainstream light laptops series, exactly what Chromebook devices are supposed to be.

The PL4 values the package power limit not to be exceeded by the power adapter and battery for longer than 10ms. Those are the highest wattages that Alder Lake P&M packages may reach and those shouldn’t be confused with PL1 and PL2 limits used a vast majority of the time.

Overall, we are looking at similar PL1/PL2 power levels to the Tiger Lake-U series but slightly higher peak values. Since the Tiger Lake-U series will be succeeded by both Alder Lake P and M series it is hard to make a direct comparison, although it is clear that the M series should be offered with very thin, possibly single-fan or passive designs, whereas Alder Lake-P should require active cooling.

It is also worth noting that the Chromebook Brya platform has slightly lowered PL2 and PL4 limits compared to ‘chipset values’ listed in Coreboot.