A roadmap featuring Alder Lake-P and Alder Lake-M series has been published by Wccftech.

Intel partners are set to being the production of Alder Lake-P laptops by the beginning of November, a leaked roadmap suggests. The roadmap actually lists two 12th Gen Core mobile series: Alder Lake-P and Alder Lake-M, the first being a higher-end version targeting 12W to 45W SKUs, whereas the latter is 7W to 15W.

System integrators (OEMs, laptop makers) might start production of the Alder Lake-P series on the 45th week which starts on November 8th. The production window closes on the 10th week of 2022 which ends on March 13th. At the same time, The Alder Lake-M is to enter production between January 17th to April 17th. 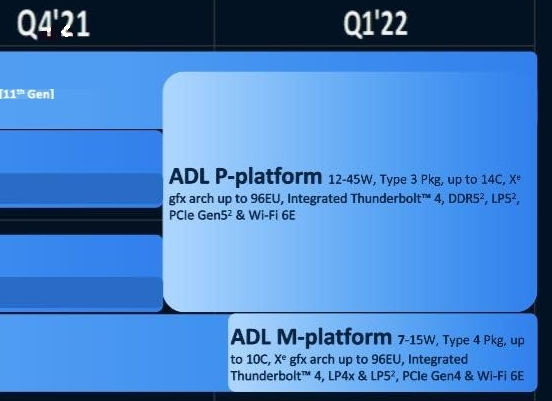 The roadmap confirms that Alder Lake-P is to feature up to 14cores, Xe graphics with up to 96 Execution Units with support for Thunderbolt 4, and Wifi 6E. More interestingly though, the series is listed with DDR5 or LPDDR5 memory and PCIe Gen5 interface, while not mentioning DDR4 technology at all.

The Alder Lake-M series will offer up to 10 cores with the same maximum number of graphics Execution Units. Unlike the P-series, the M will not support the main DDR5 standard, but either the low-power LPDDR4X or LPDDR5. The series will also rely on PCI Gen4 standard for storage and possibly discrete graphics.

Intel’s 12th Gen Core series is divided into 3 groups, which are then fragmented into 6 performance segments. The roadmap does not mention Alder Lake-S Mobile flagship series (H55) at all. The mobile SKU stack chart reveals how 14 and 10 cores configurations are achieved through the use of a combination of Performance and Efficient cores.