A low-power Alder Lake-P mobile CPU is actually faster than one of the most popular high-end Tiger Lake-H processors from the current series.

First and foremost, the Core i5-1250P is not to be confused with Xeon W-1250P. The latter is a workstation CPU based on Comet Lake architecture, while the former is the latest Alder Lake-P mobile chip. This CPU is not even the flagship SKU of the Alder Lake-P U28 series, nor it offers a full implementation of the mobile silicon (12 vs 14 cores). It’s a low-power (28W) processor with a base clock of 2.1 GHz and a boost of around 3.7-4.4 GHz (this clock is hidden in the JSON output of the Geekbench run).

The Core i5-1250P features 12 cores, out of which 4 are Performance (Big) cores and 8 are Efficient (small) cores. So in total, there are 12 cores and 16 threads, a bit unusual configuration for a mobile CPU, but this is something that we have to get used to with Alder Lake.

It was spotted running alongside MSI Prestive 14 A12SC laptop, which is a thin business laptop, definitely not something we associate with gaming machines, especially since it does not feature discrete GPU. 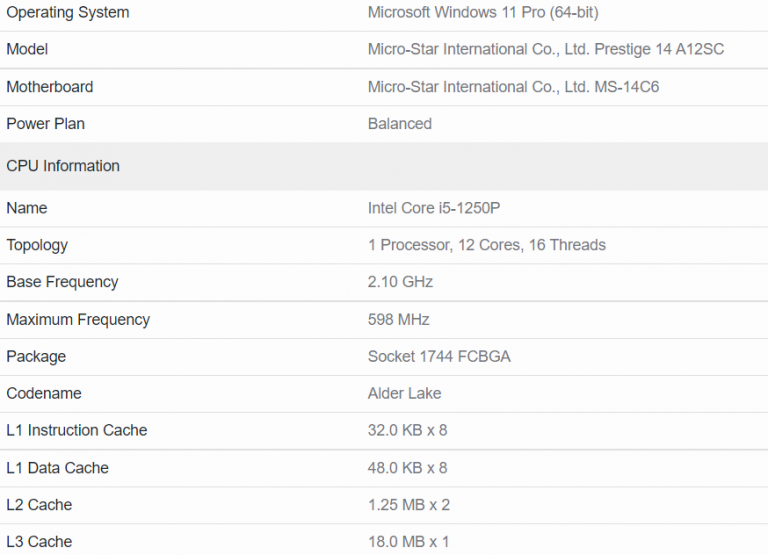 Obviously, it is easy to find better scores of the 11800H in the vast Geekbench tests database, however, the Core i7-11800H figures presented below are the average scores. In this case, the i5-1250P is actually 10% faster than 11800H in both single and multi-core tests. 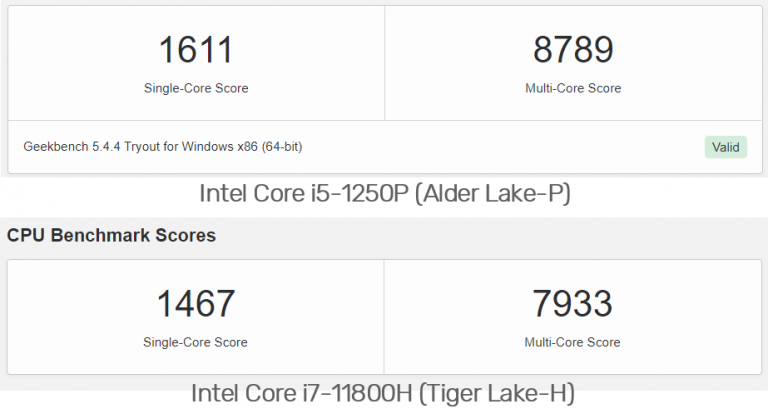 The Core i5-1250P is now set to make a debut on January 4th, alongside other Alder Lake-P chips, including the high-end 45W parts. We have listed all known variants below. Unfortunately, the clock speeds of many SKUs still remain unconfirmed, mainly because the leaks do not always showcase hybrid technology frequency correctly.

Intel Alder Lake-P U28 parts will mainly be used by ultra-thin designs relying on integrated Xe-LP GPUs (up to 96 Execution Units). We should see 12X0P parts in some Intel Evo-certified designs.