It appears that somebody is testing Intel’s upcoming 13th Gen Core desktop CPUs alongside (yet) unreleased Arc desktop graphics.

The leak comes from everyone’s favorite (/s) UserBenchmark website where a desktop Intel CPU codenamed RPL-S (Raptor Lake-S) is being tested alongside Arc A770 graphics. This leak, which was discovered by TUM_APISAK, confirms what was already known (even officially) that Raptor Lake series will see an increased core count to 24 cores (8 Performance and 16 Efficient). It also confirms that Arc A770 is now being tested for this new platform, although one would have expected this desktop graphics card to already be available.

Interestingly, the system is running with 32 GB of DDR5-4800 memory, although Raptor Lake is expected to support faster modules at launch. The Arc A770 graphics does not surprise anyone with performance, which may explain why discrete Alchemist GPU has been detected with only 1 GB of memory. 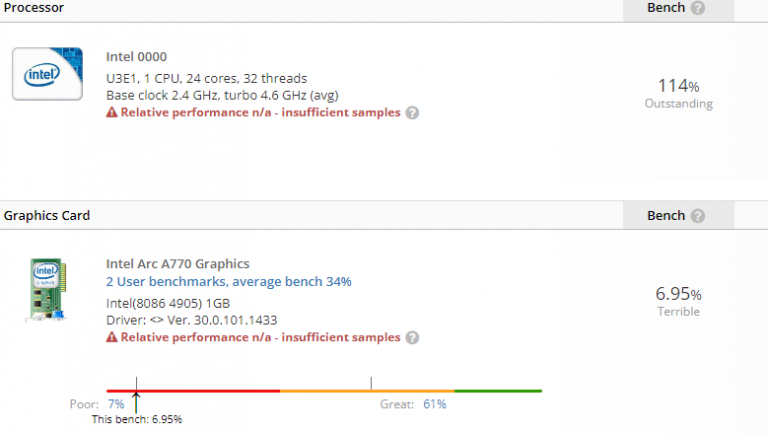 When it comes to the CPU itself, this engineering sample has a base clock of 2.4 GHz and turbo of 4.6 GHz, both much lower than rumored frequencies for Intel’s next gen desktop series, and also lower than AMD Ryzen 7000 series (reaching 5.5 GHz without overclocking).

Nevertheless, Intel has been relatively quiet in the recent weeks about its 13th Gen Core series, although we are past public demos and CPU configuration reveal. The new architecture should launch later this year, possibly around the same time we see Ryzen 7000 on the market.