This is not the first time 16-core Alder Lake CPU has made an appearance on the Geekbench website. In fact, the CPU has been appearing more and more often over the past few weeks. The previous leaks have already confirmed that the 12th Gen Core CPU will utilize DDR5 memory. What the leaks have not demonstrated yet is how fast Alder Lake really is.

It is clear that Geekbench software is not able to fully understand the complicated internal structure of Intel Hybrid Technology yet. The CPUs based on this architecture will utilize high-efficient ‘Gracemont’ and high-performance ‘Golden Cove’ cores. This is why the software reports on 16 cores and 24 threads, as the ‘small cores’ do not support Intel hyper-threading technology. While the software correctly reads the base frequency, there appears to be an issue with the max frequency reporting.

In comparison to previous leaks, this 16C/24T sample has a faster base clock. We have already seen 1.4 GHz in Geekbench V5 leak and more recently 1.8 GHz in SiSoft Sandra’s. In the Geekbench V4 benchmark the software reports 2.2 GHz as the base frequency. It is unclear if this sample is a higher-clocked model or we are simply looking at a matured prototype.

The software reports on 27.2 GHz maximum frequency which is obviously an error. It is unclear how the software ended up with such a number, but one would guess it’s either a multiplication of 8 or 10. It would mean that the actual frequency is around 2.7 to 3.4 GHz. It is also possible that the frequency is only read from the Gracemont cores, which might have a lower boost frequency compared to Golden Cove. 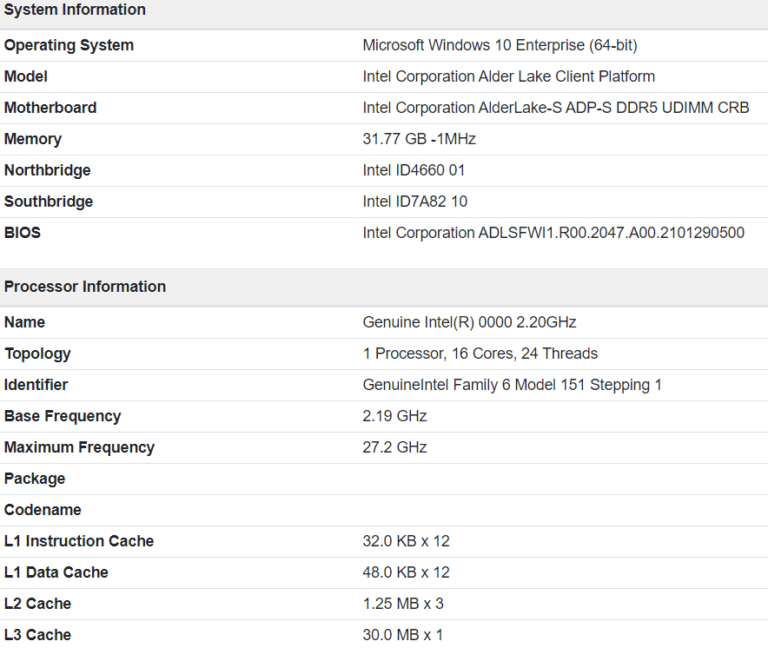 Since Geekbench does not have an official ranking page for its V4 (Version 4) scores, median results were used from the software’s public database (for both single-core and multi-core). This method is not an ideal solution, but it should be accurate enough to see where this Alder Lake-S CPU stacks up at this stage.

The performance is likely to increase with ES2 (second revision engineering sample) and later with the retail unit. However, it remains to be seen how much more frequency will still be added to the 16-core and 24-thread Alder Lake CPU.

Intel is expected to launch its 12th Gen Core series by the end of 2021.