The diagram lists the most important details on 14th Gen Core mobile CPU series known as Meteor Lake (MTL). This is the first time we learn about all three product series: H, P and U, each representing a different power segment.

This is also the first time we learn about a third CPU core listed as LP E-Core (possibly meaning Low Power Efficient Core). Rumors about ultra low power small cores have been circulating for a while, but this would mean Intel is indeed implementing a third type of core into its architecture, somewhat similar approach to ARM architecture which also has 3 cores.

According to @OneRaichu, the third core is implemented into the SoC tile, not the compute tile like the P and E cores. Furthermore, there are only two ultra low power cores. This may explain why they are not included into total CPU core count. 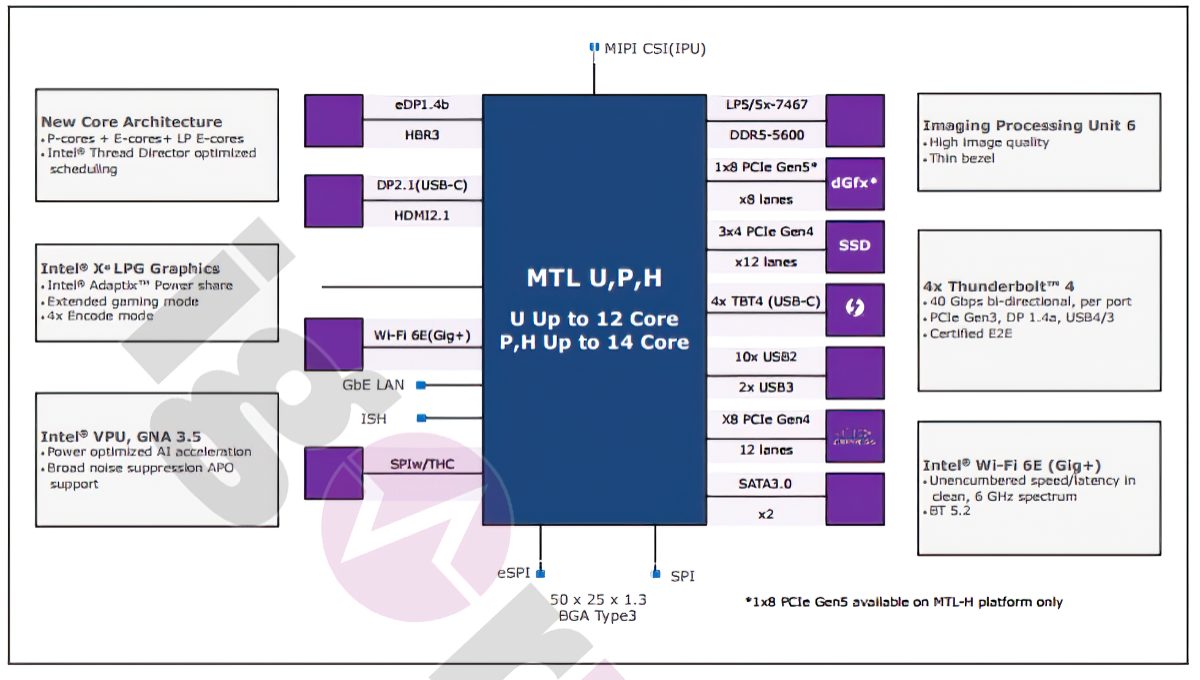 According to this new information, the Meteor Lake-H and Meteor Lake-P will both feature up to 14 cores (listed as 6+8), while Meteor Lake-U would be limited to 12 cores. Furthermore, the new architecture officially supports DDR5-5600 or LPDDR5/LPDDR5X-7467 memory. Up to 96GB of memory will be supported for DDR5 standard and 64GB for LPDDR5 type.

The slide also mentions a new Intel Xe-LPG graphics architecture, which is based on Xe² as listed later in the documents. The MTL H/P/U integrated GPU would feature up to 128 Execution Units. What is unclear is whether Xe² here means next-gen gaming architecture known as Battlemage or a new low-power version of Alchemist.

For discrete GPU, Meteor Lake series will offer up to 8 lanes for PCIe Gen5 interface, but this feature will be exclusive to the H (gaming) Meteor Lake mobile CPUs. There is no mention of M.2 PCIe Gen5 support.

The slides leaked by Igor confirm that the 14th Gen Core series are to launch in the second half of 2023.