It is said that Intel Raptor Lake processors will launch on October 17th, which is almost 3 weeks after the official introduction during the Innovation event. On this date, Intel will launch its K-series CPUs from 13th Gen Core series “Raptor Lake-S” along with Z790 high-end motherboards.

According to the same source, the company has a different launch date for mid-range H770 and B760 motherboard reveal. Those should appear at CES 2023 on January 5th next year. This launch is to include the non-K (locked) Raptor Lake CPUs as well. 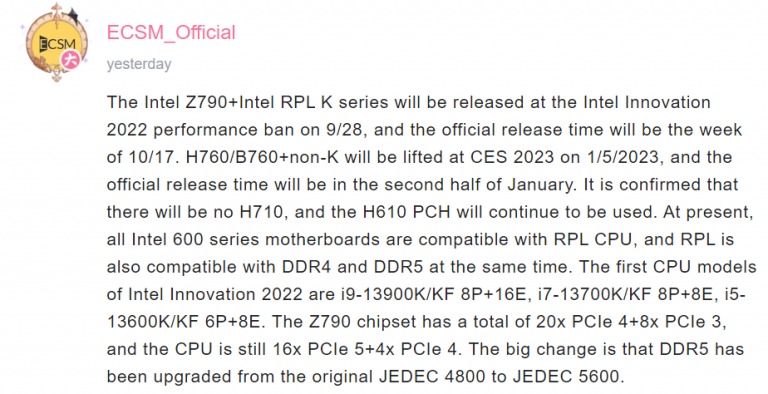 The arrival of Raptor Lake will sooner than a year after Alder Lake desktop, which has too been split into K and non-K series launch. The rollout began on October 27th and was also part of the Innovation event. However, it wasn’t until November 4th that new CPU series have become available in stores.

Interestingly, Raptor Lake is now most likely set to launch after AMD releases its Ryzen 7000 series. This new desktop Zen4 and AM5-socket based platform should become available at least two weeks sooner, given the most recent rumors.