All the details on upcoming 13th Gen Core clocks have been confirmed by Wccftech.

Where are the times when CPUs only had base and boost clock? With the introduction of hybrid architecture of Performance and Efficient cores, multiple boost technologies, and above all, increase core count, Intel now has to disclose many clock speeds for just one generation of CPUs.

According to the leaked spec sheet, Intel is preparing four Core i9 SKUs: 13900K, 13900KF, 13900 and 13900F. The F-variants lack an integrated GPU solution, but are otherwise the same chips. All i9 processors feature 24 cores in total: 8 Performance cores and 16 Efficient cores. The difference between K and non-K series is obviously the base TDP, either 125W or 65W. 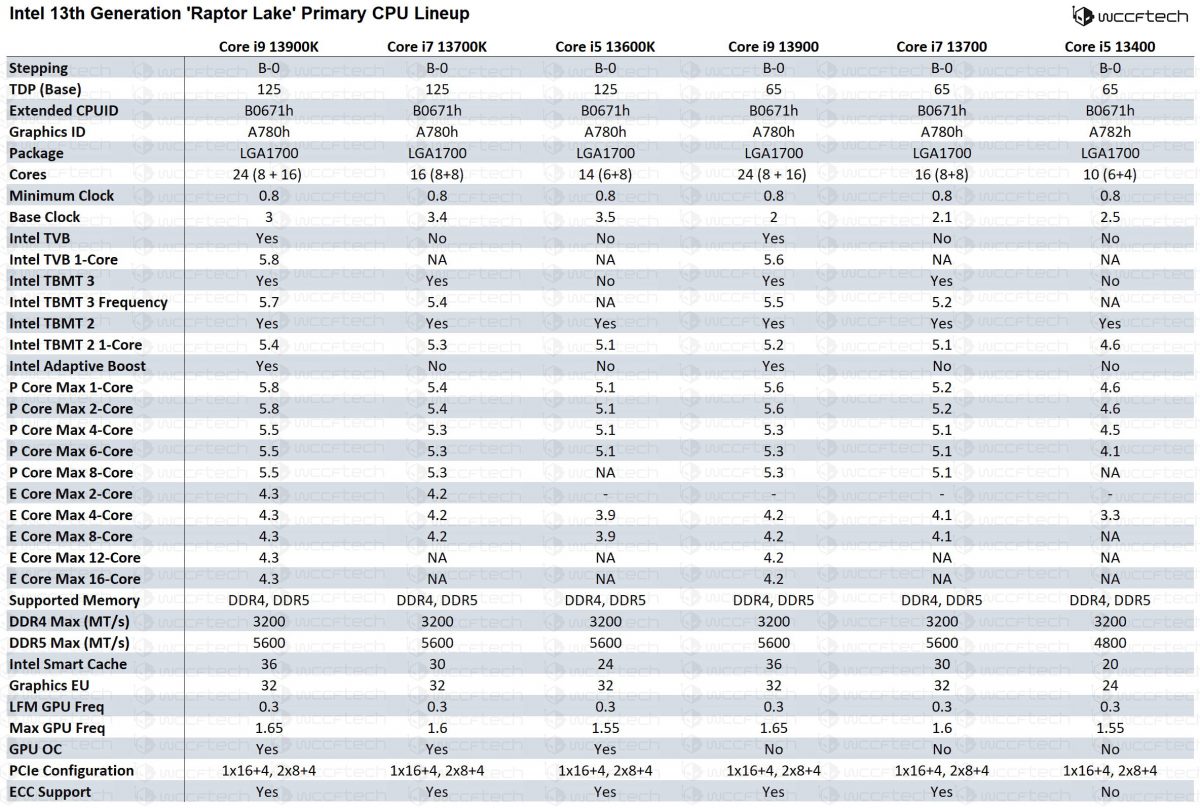 The intel i7 series will also feature four models, but the main difference here is a smaller cluster of Efficient cores (8 instead of 16). Furthermore, i7-K series models will boost up to 5.4 GHz while i7-non-K models such as 13700(F) will operate up to 5.1 GHz.

Finally, i5-13600K/KF models are to be equipped with 6 Performance cores and 8 Efficient cores. One should expect maximum boost clock up to 5.1 GHz. There is no non-K model listed here, but there is i5-13400F featuring 1/4 of the Efficient core cluster (4 cores). This 10-core CPU has a boost up to 4.6 GHz according to the leaked information. This CPU has B-0 stepping, so most likely Raptor Lake silicon. 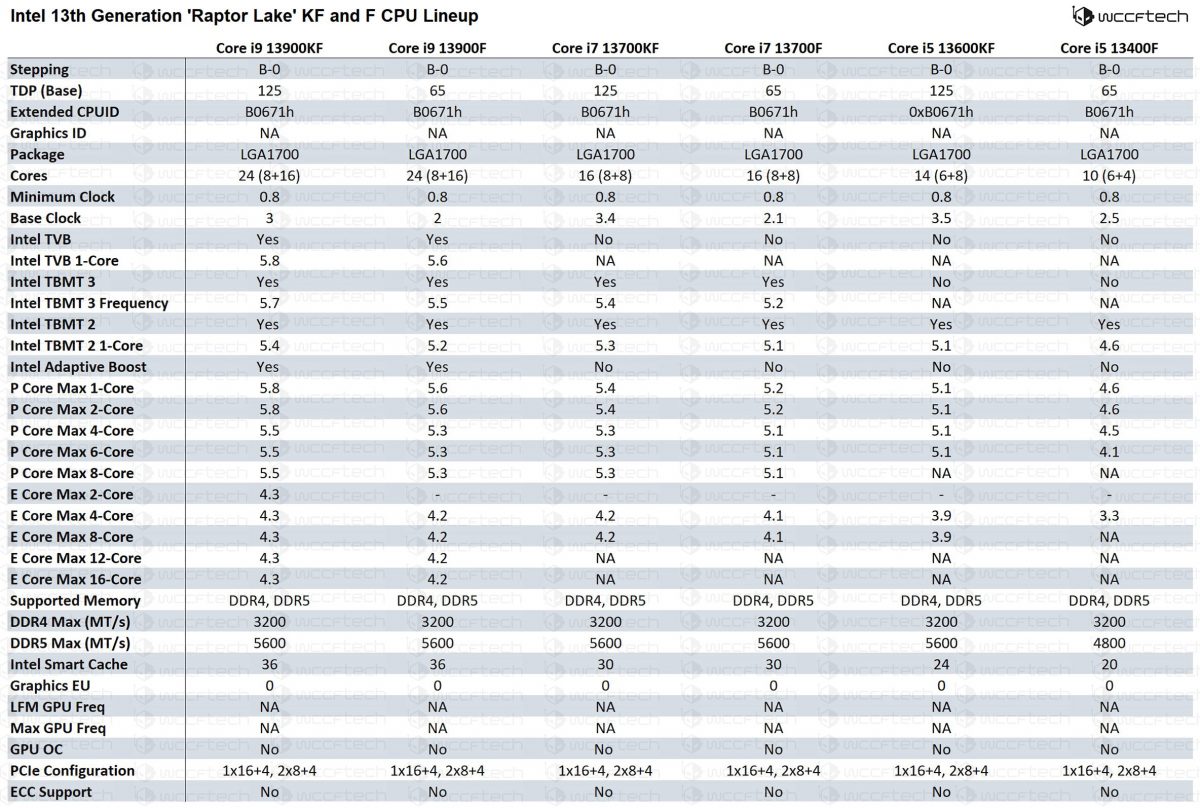 Furthermore, there is a confirmation on first T-series desktop CPUs, including i9-13900T and i7-13700T. Those CPUs are designed for low-power 35W default TDP and offers maximum turbo clocks of either 5.3 or 4.9 GHz. 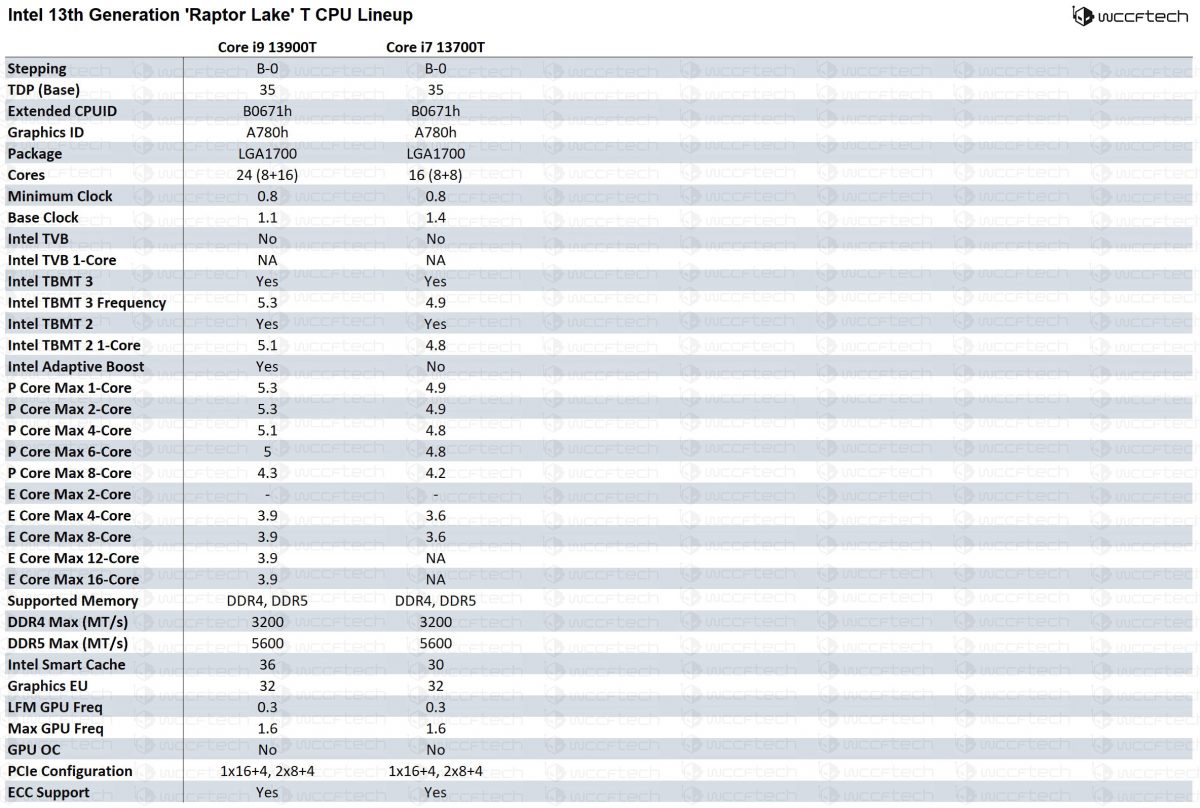 Intel Raptor Lake supports up to DDR5-5600 memory or DDR4-3200. That’s an upgrade over Alder Lake-S that support for 4800 MT/s JEDEC specs by default. What is worth noting is that i5-13400 CPU is the only CPU not support 5600 MT/s speed, either suggesting this is an Alder Lake rebrand or simply lowered specs by Intel. AMD Ryzen 7000 series officially support up to 5200 MT/s JEDEC specs, but the company commented on the ‘sweet-spot’ being 6000 MT/s.

Intel Raptor Lake-S are set to launch in October following official announcement on September 27th at an “Innovation” event. At the same day, one should expect new information on Intel Z790 motherboards equipped with the same LGA1700 socket as 600-series, compatible with both Alder and Raptor Lake series.