Unlike the Tiger Lake-U series, the higher-end version will also have a limited GPU compute power. The U series offer up to 96 Execution Units based on Xe-LP GPU architecture, while the H-variants will be locked to 32 EUs. The series will focus on CPU performance and will be paired with discrete GPU options anyway, so it shouldn’t really matter to end-users. In the end, there is more power available to the CPU compute cores.

As revealed by the previous leaks, the Tiger Lake-H series will also be designed within a 45W power envelope, similarly to the previous high-end mobile series:

Today, a leaker APISAK discovered a first entry of such 8-core Tiger Lake processors at Userbenchmark. The platform on which the processor was tested is codenamed “Insyde TigerLake”. It appears to have been tested on a monitor with 2560×1600 resolution, which is certainly an unknown resolution for a gaming notebook, thus this is likely a desktop monitor and we are looking at very early testing within a lab environment, not a finished laptop: 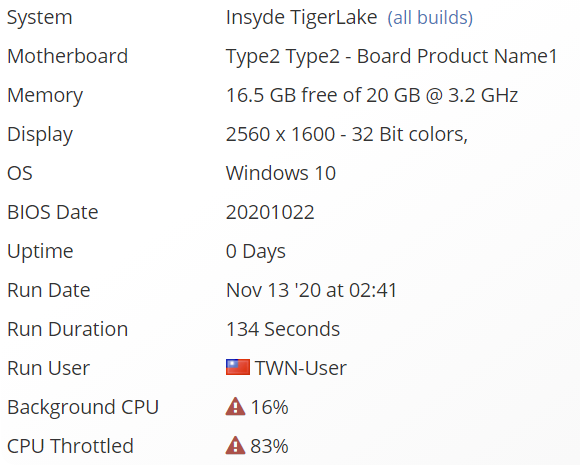 User benchmark has controversial methods of comparing Intel and AMD processors, so it would be wise to ignore these performance metrics till we see leaks from more reputable benchmarking platforms: