According to the article at Wccftech, Intel has provided new embargo dates for its Rocket Lake-S series

It is said that the processor series codenamed “Rocket Lake-S” will be announced on March 16th, a day after it was previously reported. Additionally, Intel allegedly confirmed it will lift the embargo on reviews and sales on March 30th.

We have always criticized companies for lifting sales and review embargoes at the same time, especially under current circumstances where almost no product is in stock. But taking preorders on products that have not been independently tested almost two weeks sooner, is just a clear anti-consumer approach. It seems that Intel will be doing just that with their 11th Gen Core series according to the dates posted by Wccftech:

The company has allegedly told board partners and the late review embargo is due to a microcode update that is due to release in March. It does not however explain why preorders need to happen sooner.

This situation is also a reminder that it is never a good idea to preorder anything unless it’s a lot cheaper, comes with an exclusive bundle or there is a chance of free return or cancellation. NVIDIA, AMD, and Intel have all been criticized in the past for lifting review embargoes at the same time as the product launch. But there is a sign that manufacturers are beginning to understand that this is simply not a consumer-friendly apprach. NVIDIA, for instance, will lift the embargo on its GeForce RTX 3060 graphics card three hours before the sales will officially begin. This gives you a chance to read reviews before making a final decision. The fact that those cards are already widely available on auction sites or sold under the counter, it’s a different story.

Intel has so far released two slides showing Core i9-11900K performance. This is so far the only official information on next-gen flagship performance. 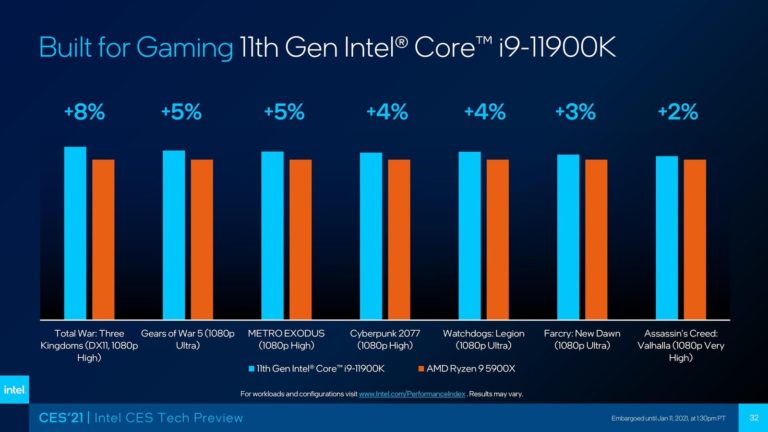