And so it begins, a flood of new RTX 30 graphics cards.

INNO3D has released its LHR models based on updated GA10X-X02 GPUs. Those GPUs feature a new hash rate limiter for cryptocurrency mining. NVIDIA’s guidelines for AIBs were quite straightforward, they are asked to make a new SKU, list the information about LHR directly on the product page, and put a badge/label on the packaging. So far we have only seen one manufacturer with an LHR badge on the box.

Overall the introduction of the LHR series will certainly generate some confusion among customers. On one hand, NVIDIA wants AIBs to explicitly confirm they are now offering LHR models, but at the same time, AIBs have absolutely no intention do to so. The long story short is that they are now forced to reintroduce hundreds of graphics cards that have established positions on the market. This is why some board partners will simply release a second revision (such as Gigabyte Rev.2) or by way by naming them “version two/V2” (like ASUS). Fortunately, some board partners will make this even simpler and add LHR information directly in the product name. One of such brands is INNO3D: 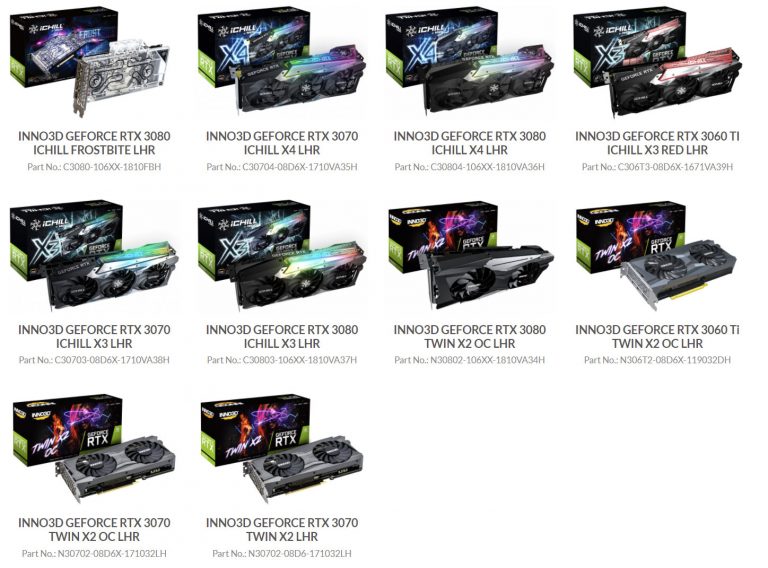 Inno3D is not relaunching every single SKU, but instead only the most popular ones. In total there are now 10 new cards added to the manufacturer’s website. They are listed with the following information:

It is also worth noting that our database has separate sections for each of the LHR SKUs, including RTX 3060 which is officially not part of the LHR series. However this SKU has a reintroduced hash rate limiter and new GPU (GA106-302), hence we consider it a new LHR SKU regardless of NVIDIA’s product naming:

We will be updating the database as new AIB models are released.