The manufacturer has confirmed to Dutch retailer Azerty that the Twin X2 series has been discontinued.

Azerty has reached out to customers who have preordered the Inno3D GeForce RTX 3060 Ti and RTX 3070 Twin X2 graphics cards. The message posted by a Tweakers forums member was allegedly was sent out to the customers who preordered these cards. It says that Inno3D has no plans to restock or offer a replacement for the Twin X2 graphics cards, which have now been ‘discontinued immediately’, a message reads:

We have just received a disappointing message from the manufacturer about the ordered Inno3D GeForce RTX 3060 Ti Twin X2 video card.

Unfortunately, lnno3D reported this morning that the Twin X2 series of the 3060 and 3070 have been discontinued immediately and the cards will therefore no longer be delivered, they will also will not supply a successor or replacement, given that the demand for the other 3060 cards cannot be met at this time.

It is unclear if the email refers to the whole Twin X2 series or just the non-OC variants specifically. Inno3D currently offers four models based on GA104 GPU. The RTX 3060 12GB SKU Twin X2 series are listed on the website too but since NVIDIA has not yet launched this SKU, those graphics cards are not yet available on the market.

Due to limited supply of GPUs, some manufacturers are now prioritizing OC models that offer higher margins. It is possible that the series has not been completely discontinued. Inno3D might simply be focusing on Twin X2 OC models instead.

Update: Andreas Schilling (HardwareLuxx) has reached out to Inno3D for a comment. The company confirms that it will be focusing on OC variants due to limited supply, but the original Twin X2 series is, in fact, not discontinued:

Had a talk with Inno3D:

– those cards are not discontinued, but Inno3D is focusing on other SKUs (OC variants) because of the limited supply
– it’s just the RTX 3060 Ti and RTX 3070 Twin X2, the not yet available RTX 3060 is not effected by this https://t.co/UUIdpcsDA0 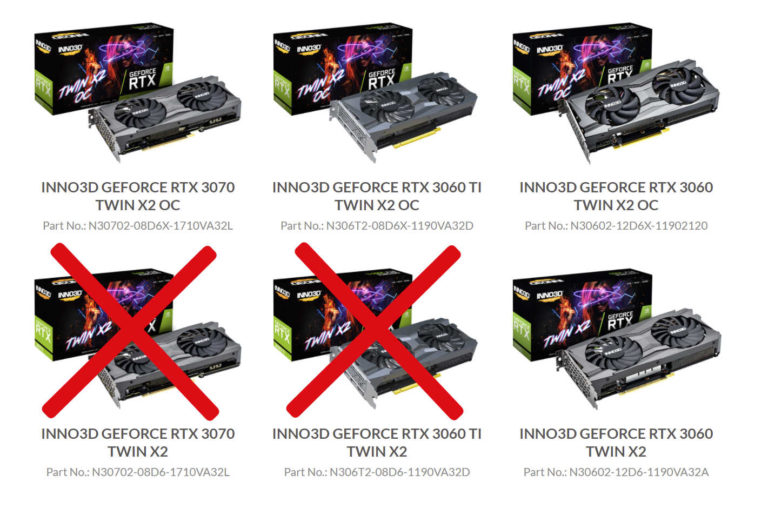