Intel Raptor Lake PCH to be supported by HWiNFO

The 12th Gen Core series will be the first to feature the new LGA1700 socket, the backbone of Intel’s modern PCIe Gen5 and DDR5 platform. Intel has so far made no promises about the longevity of its upcoming platform, but it should support at least two of the upcoming generations of CPUs: Alder Lake and its successor called Raptor Lake. There were also rumors that the support might even extend into the third series, but it is certainly too soon to confirm.

In the upcoming changes tab, HWiNFO now reports that Raptor Lake Platform Controller HUB (PCH) will soon be supported. The developers do not reveal if this is preliminary support based on embargoed documentation or first engineering samples, which as far as we know were not distributed yet. However it possible that the blueprints for next-gen PCH are already available to the developers of this popular monitor tool: 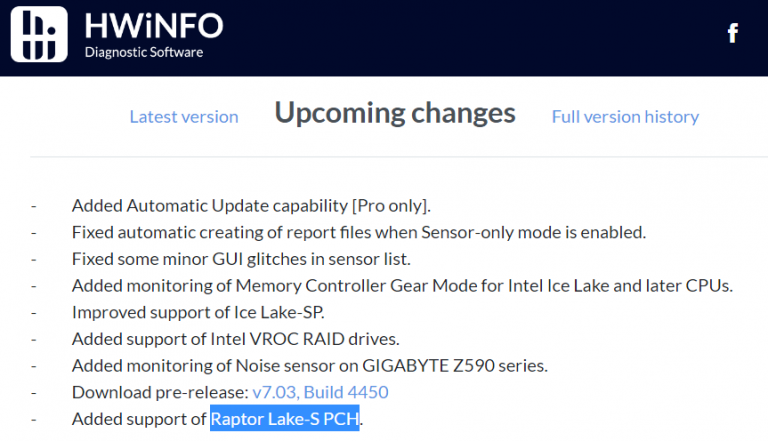 Not much is known about Raptor Lake itself except for what we have exclusively leaked last month. The series will launch for both mobile and desktop markets, just as with Alder Lake. Intel claims that the most important upgrade is “new hybrid CPU core changes for improved performance”, which is listed for both variants. This slide also lists LPDDR5X support for mobile SKUs and improved CPU cache for desktop SKUs, which should affect gaming.

It is expected that Raptor Lake will debut as the 13th Gen Core series in 2022. The series would compete with AMD Zen4 CPUs that should already be available at that point in the future.