The company is now listing its Omen 17 2021 laptop with Core i9-12900HX processor. The product page was clearly not meant to go live this soon, as even the ‘shop now’ button does not lead to any such offer. Not to mention the fact that the sub-title mentions “11th Gen Core” series.

What the listing does confirm though is that the upcoming Core i9-12900HX processor with boost up to 5.0 GHz will feature 16 cores and 24 threads. Even the Gigabyte AORUS 17X laptop that leaked a few days ago did not mention the core count. Therefore, this is the first official confirmation that this part will indeed feature more than 14-cores, which was thus far the limit of Alder Lake mobile series. 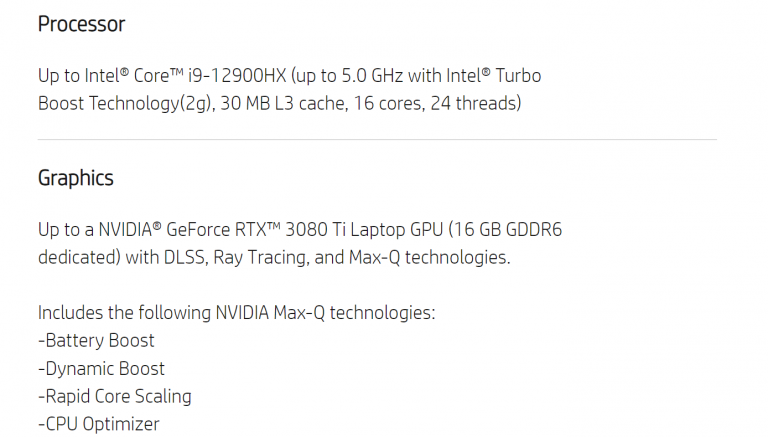 With the launch of Alder Lake-HX, Intel will become the first company to launch a 16-core processor series designed specifically for laptops. However, it won’t be the first time we get such a core count on a mobile platform. We have already seen attempts to launch desktop CPUs for workstations systems that shipped with a full desktop socket and allowed customers to choose high-performance CPUs as long as they were limited to 65W. Therefore, it is technically possible to buy a laptop with Ryzen 9 5950X CPU, but it will not be as fast as the full fledged desktop system.