The developer of CPU-Z revealed that Intel Alder Lake contains a bug that allows frequency misreporting. We are publishing the full statement from Doc TB:

First, we have been talking to motherboards manufacturers, Intel’s team and many major overclockers on a daily basis for several months about ADL overclocking. A lot of talented overclockers all over the world spent a lot of time trying to reach world-records since weeks.

We started to see the first “hard-core” ADL overclocking in early September. Almost immediately, a silicon errata was found with ratio set at > 63. In some rare conditions, the internal CPU PLL fails to lock and remains at the previously set ratio while reporting the new one.

Quickly, we received many 8/9/10/12+ GHz fake “overclocking” on early Alder Lake samples. As it was way too late to patch the issue on silicon (and not really a big thing for 99.99999% of Intel’s customers), Intel team worked their ass off to found a fix. Congratz to them!

On the validator side, about a month ago, I’ve added a lot of additional checks (microcode version, core throttling, fll_oc_mode register checking) to invalidate the already-posted entries that exploited the issue. Everyone played quite a lot just for fun, so it was necessary. Grinning face with smiling eyes

For the last 4 weeks, all big overclockers linked to motherboards makers worked seriously on ADL with these new fair rules. The overall consensus was that full all-cores benchmark stability is possible at around 7 GHz and “suicide run” on single core up to 7.5-7.6 GHz.

WR records between 7.5 and 7.6 GHz were set and broken almost each days, by a few MHz at most. many overclockers tried a lot of CPU (20/50/100+ samples) to grab the golden ones able to reach these frequencies … or a few MHz higher

Then suddenly, some days ago, we saw a unique 8 GHz validation popping from nowhere. Knowing that tens of overclockers tested hundreds of CPUs on a bunch of motherboards while all struggling around 7.5 GHz, that’s quite suspicious at least… Face with

Was the PLL lock bug back, this time on a way we can’t detect as it passes all internal checks? Seems legit. Technically, we can think about a way to trick the CPU if we have access to BIOS source code (some overclockers working with MB makers have them).

It basically involve first messing with CPU ratio, then upgrade the microcode, and finally set the FLL_OC_MODE to enabled, all at boot time. That could led to a situation where the flag is enabled but the CPU still at a much lower ratio than reported.

In all cases, it’s necessarily intentional because this involve a lot of complex operations and messing with early boot stages. Intel team worked on this and found a way to check if the PLL is really locked by messing quite badly with some performance MSRs.

Problem: if the PLL is not locked, the whole CPU will hard-lock immediately, needing a reboot to recover. That’s something we can’t implement in CPU-Z because all Windows crashes are reported by Microsoft’s mandatory telemetry Grimacing faceand we can be banned by Windows Defender for that.

There’s nothing we can do on our side right now.Worried faceThe issue is now on Intel’s hands, needing a new hardware stepping or maybe another microcode patch. Solving such a niche issue to prevent ppls messing with BIOS source code is a real challenge and probably not on the top list. Grimacing face

An extreme overclocker HiCookie achieved something that was not possible with the previous Intel Core series, an 8GHz clock speed.

According to HWBOT, the highest frequencies achieved with Core i9-10900K and Core i9-11900K CPUs were 7707 MHz and 7334 MHz respectively. The Comet Lake-S CPUs have been on the market for a while now, while the Rocket Lake-S model had 8 months to go past this value, which has not happened.

Intel is about to launch its new CPU series tomorrow and overclockers have been busy behind the scenes putting Alder Lake under liquid nitrogen and claiming new world records. It appears that HiCookie managed to break a new record with a Core i9-12900K at 8GHz, a frequency not even achieved with the previous series.

Furthermore, in a separate overclocking attempt, HiCookie scored 8.3 GT/s (4198.8 MHz) speed with Gigabyte DDR5 memory. To achieve such a speed, HiCookie put 52-52-52-100-127-2 timings on the memory. He used the AORUS Z690 Tachyon motherboard to claim both records. 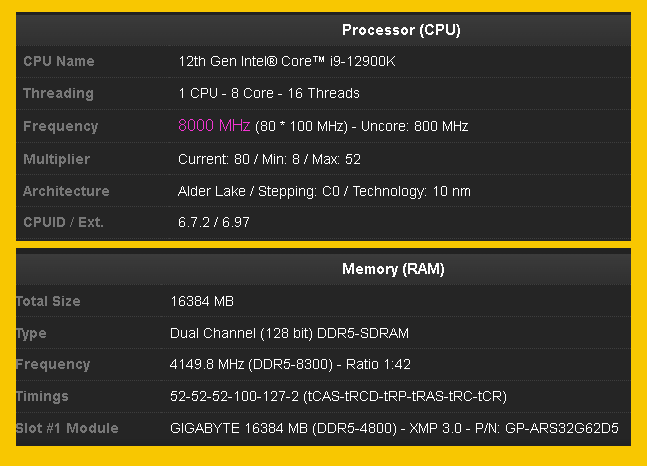 The screenshots featuring this achievement were published a bit early, to say the least, by AORUS Spain. We are likely to hear about other world records with the Intel 12th Gen Core series tomorrow, once the embargo on such content formally lifts. 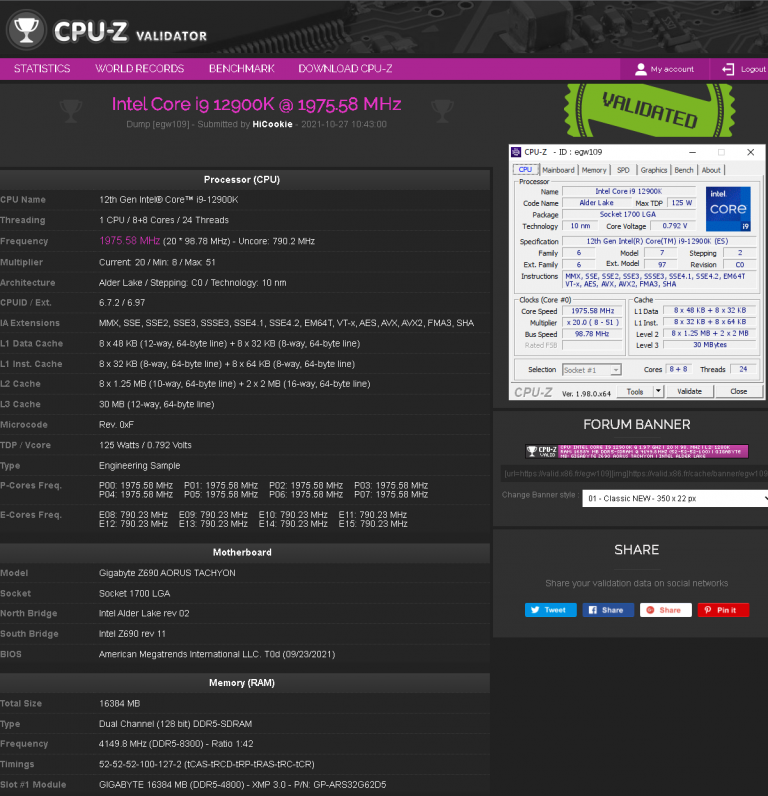 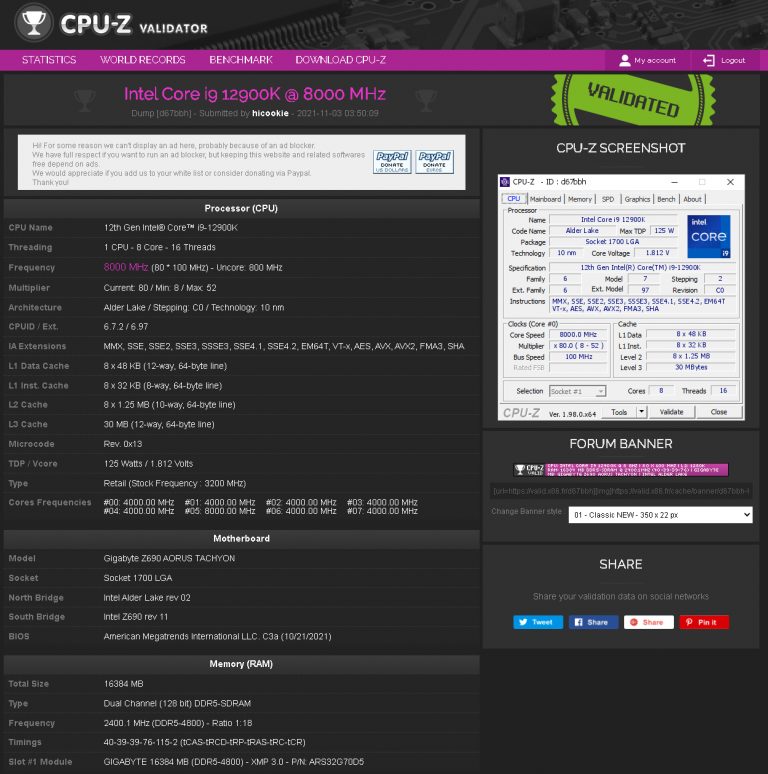