NVIDIA is in serious trouble

Hacking group LAPSUS$ claims to have gained access to NVIDIA servers for a week and has been able to exfiltrate 1TB of data.

The group responsible for the ransomware attack on NVIDIA servers a few days ago, now reports that they had access to NVIDIA servers for about a week and have been able to gain admin access to a lot of systems. Furthermore, the group claims that despite NVIDIA’s efforts the data including drivers, schematics or firmware has been accessed.

To make matters worse, it is said that an LHR V2 bypass for GA102 / GA104 GPUs is now being offered for sale, which means that the group has allegedly found the algorithm that was responsible for the crypto mining hash rate limiter implemented into the RTX 30 series last year.

NVIDIA is clearly not engaged in any form of contact with the group. This may lead to the group sharing the data with the public. From what the Telegram messages appear to suggest, this has already begun. 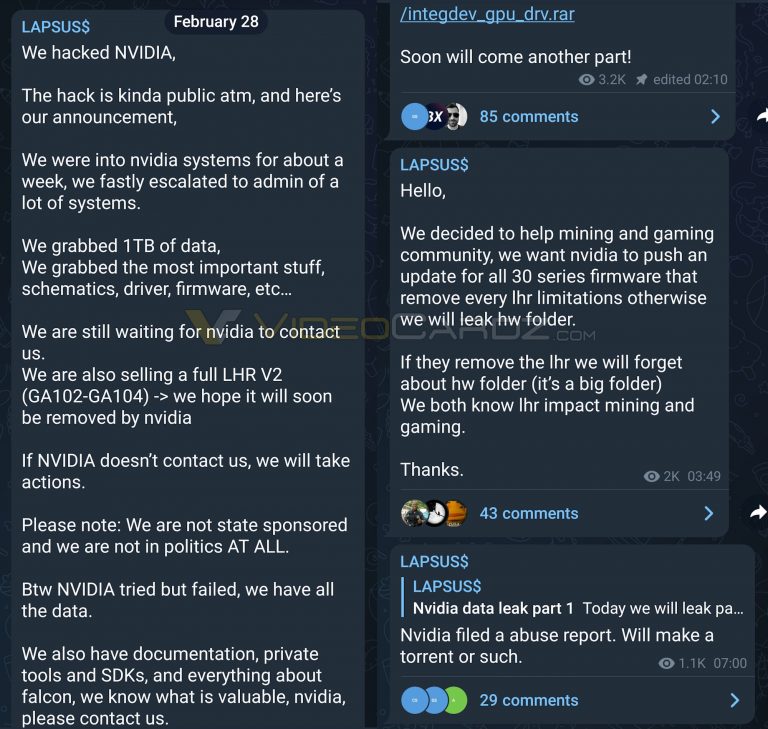 The group has already released the first part of the leak and based on what we have been told the partial data included in the package appears to match the claims. Of course, we do not encourage anyone to download this data for various reasons that should not even require any explanation.

NVIDIA has not yet publicly confirmed that their servers were hacked, but confirmed that they are investigating an incident. According to the messages posted by the hacking group, NVIDIA attempted to hack the group back and encrypt the stolen data, but unbeknownst to them, it was already preserved in other copies.

Many thanks to @harukaze5719 for the tip!