In their regular updates on the GPU market situation in Europe, 3DCenter now reports on a major reduction of GeForce RTX graphics card pricing and better availability.

While AMD graphics cards see neither a price reduction nor better availability month-to-month, there is a major shift in GeForce RTX pricing, according to 3DCenter’s report. On average GeForce RTX graphics cards are still 91% more expensive than MSRP, but that’s already a 113% difference month to month when GeForce cards pricing has skyrocketed to 304%. Last month NVIDIA has reduced the shipment of GPUs significantly as the company was shifting its production to the Lite Hash Rate series, this has led to a large backlog of orders, which are now progressively being reduced as LHR models being to ship to customers.

GPU pricing is not expected to drop as quickly as it rose in May, mainly because retailers have ordered the cards at higher prices and now they are reluctant to sell at a loss. However, at some point distributors will lower their pricing (which is way above MSRP) will which then allows retailers to offer discounts and still make a profit.

An introduction of GeForce RTX 30 Ti and RTX 30 LHR series in combination with the recent ban on cryptomining in China has been contributed to the price drop. Meanwhile, AMD have not released any desktop graphics cards in the last two months, but they have added the mobile RX 6000M series to their lineup which are too based on RDNA2 GPUs. 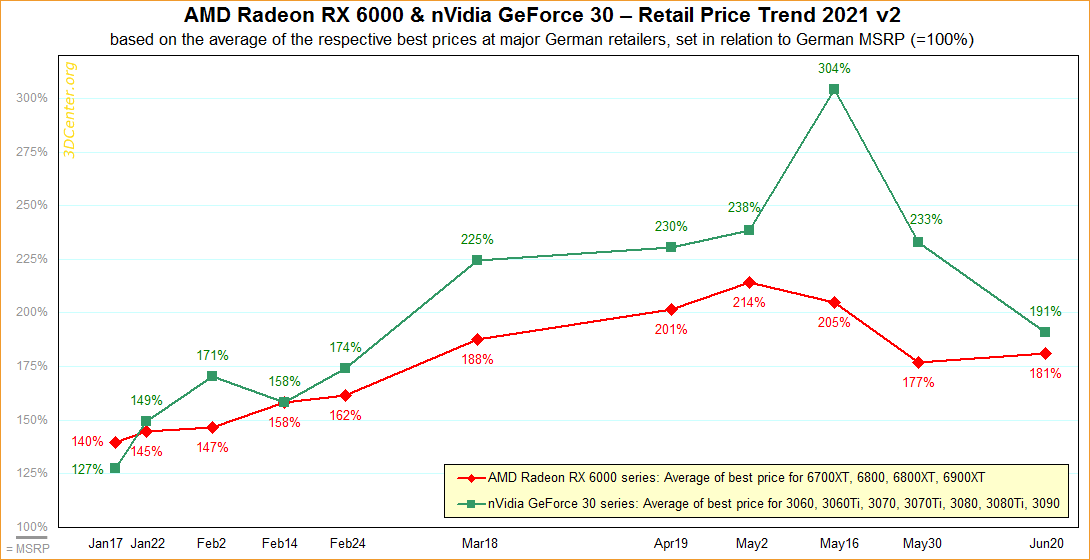